How much is Jolene Blalock Worth?

Jolene Blalock net worth and salary: Jolene Blalock is an American actress and model who has a net worth of $30 million. It should be noted that a majority of her net worth is attributable to her husband Michael Rapino who is the CEO of Live Nation. In 2017 alone Rapino earned $70 million in total compensation which was enough to make him one of the highest-paid executives in America. In 2017 he also signed a five-year contract that paid a base salary of $9 million.

Jolene Blalock was born in San Diego, California in March 1975. One of her best known roles came starring as Commander T'Pol on the television series Star Trek: Enterprise from 2001 to 2005. Blalock has starred in the movies Slow Burn, Shadow Puppets, Starship Troopers 3: Marauder, Sinners and Saints, and Sex Tape. She has also appeared in episodes of the TV series Veronica's Closet, Love Boat: The Next Wave, D.C., CSI: Crime Scene Investigation, JAG, Stargate SG-1, CSI: Miami, House, 10 Items or Less, and Legend of the Seeker. Blalock won Saturn Awards in 2002 for Best Supporting Actress in a Television Series for Enterprise as well as a Cinescape Genre Face of the Future Award.

Personal Life: Jolene Blalock married Michael Rapino, the CEO of Live Nation, in 2003. They met after he booked her for a beer commercial. Jolene actually proposed to Michael. They lived in England together when Jolene was starring on Star Trek: Enterprise. Today they have three children together.

Michael Rapino and Jolene Blalock Real Estate: In 2003, right around the time they married, Michael spent $2.8 million on a home in Los Angeles. Ten years later they sold the home for a shade over what they spend back in 2003. At the same time in 2013 they spent $14.75 million on a large two-parcel prpoperty in LA's Brentwood neighborhood.  The resulting two-acre compound featured an 11,000 square foot main house and a 2,400 square foot second house. The seller of both lots was a financier named John Rocchio who is the co-founder of a private equity firm called Newstone Capital Partners. Rocchio spent around $11 million to acquire the two parcels in 2006. In March 2018, Jolene and Michael spent $11 million to acquire a fantastic home in Malibu, California through a trust. The 3,300 square foot beachfront property had been listed for $12 million. In total, the Rapino-Blalocks own at least $30 million worth of real estate alone. 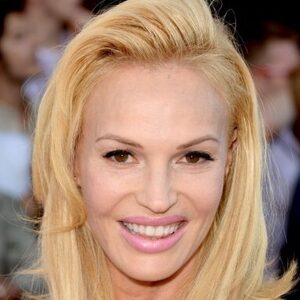