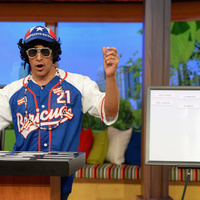 Johnny Lozada Net Worth: Johnny is a singer, actor and television host from Puerto Rico who has a net worth of $2 Million. He was born there, and is the only son of Ramon Lozada and Aracelis Correa. Johnny started off his career as a member of boy band Menudo in 1980. He also went on to star in QueiroSer and Espor Amor, which were telenovelas that were based on the group. The boy band was such as success in all of America such that it eventually led to a lot of doors opening for Latin Americans. The group's main achievements were four sold-out concerts in Brazil and Madison Square Garden. He stayed on for 4 years after which he broke away and formed his own band called Proyecto M, with 2 other Menudo alumni. Later, after the band dissolved, he ventured into acting and begun appearing on several telenovelas. In 1998, he and some other members of Menudo reunited to form El Reencuentro, as a way of remembering their days as the Menudo band. Some of their songs were new renditions of their old Menudo songs. Their concerts were very successful, and they toured together for several more years. In fact, in their reunion allowed them to tour all over the United States as well as Latin America. In 2010, John joined a latin gossip show called Sal y Pimienta. After working on the show for 2 years he left to host the show Despierta America! John has also had stints working in theatrical productions such as Al Aire and Manos Quietas. He is currently still the host of Despierta America!