How much is Johnny Galecki Worth?

Johnny Galecki Net Worth and Salary: Johnny Galecki is a Belgian-born American actor who has a net worth of $100 million. Best known for his role in the immensely popular sitcom, Big Bang Theory, Galecki has captured the attention of a global audience. His fame and success have made him incredibly wealthy. In 2018, he was the second-highest paid actor in the world, with earnings of $25 million in that single year. Johnny Galecki also owns significant real estate holdings, including 360 acres of land in Santa Margarita, California.

Early Life: Galecki was born into a military family on April 30th, 1975. His father was a member of the U.S. Air Force, and his family was stationed in Belgium at the time of his birth. His mother worked as a mortgage consultant at the time, and his father sometimes worked as a rehabilitation teacher in addition to his military duties. Galecki is the eldest of three children and has a brother and sister. It wasn't long before the family relocated to Oak Park, Illinois, where Johnny grew up.

Galecki has explained that during his childhood, he always had a strong imagination. He had a habit of making up long, fantastical tales and stories. This creative streak was often at odds with his family, who liked to keep things relatively strict. This was especially true in regards to Galecki's mother, who often told him to be quiet or simply leave the room altogether. That being said, Johnny Galecki was raised in a loving, supportive family.

Early Acting Roles: Galecki became involved in acting by age seven, participating in the theater community in Chicago. By age 12, he had booked his first television role in Murder Ordained. This marked the starting point of an impressive and fruitful career. Two years later, the teen had landed a role in his first movie – National Lampoon's Christmas Vacation, in which he played Rusty Griswold. At age 15, he landed a prominent role in a comedic show called American Dreamer. During the next year, he booked parts in shows like Blossom and Billy. During this period, Galecki worked alongside actors that he would collaborate with once again as an adult actor.

Mainstream Success: A major breakthrough came for Johnny Galecki when he was featured on the hit show Roseanne. Although his appearance was initially meant to be a brief one, he became a regular member of the cast from 1992 onwards. This role helped put Galecki on the map, and fans of Roseanne appreciated his presence. He continued to appear in Roseanne up until 1997, when the show came to an end.

After Roseanne, Johnny turned his attention back towards film. The actor showed his range with a role in I Know What You Did Last Summer, an iconic horror flick. He also landed roles in comedies such as Bounce and The Opposite of Sex. Throughout the late '90s and early 2000s, Galecki continued to appear in a range of high-profile films, such as Bean and Vanilla Sky.

In 2007, Galecki returned to his roots with an impressive theater performance. The actor played a prostitute in the Broadway play The Little Dog Laughed, and won widespread critical acclaim as a result.

Big Bang Theory: In terms of financial success and fame, the show Big Bang Theory carried Johnny Galecki to a completely different level. In 2007, the actor was cast as Leonard Hofstadter, although he was originally offered the role of Sheldon Cooper. The long-running and immensely successful show also cast Kaley Cuoco and Jim Parsons in leading roles. These individuals would become incredibly wealthy as a result of the project.

Big Bang Earnings: Galecki's earnings steadily increased through the years with Big Bang Theory. During the first season, the actor earned $60,000 per episode, although those numbers would increase with time. By season two, he was earning $250,000 per episode – a trend that would continue till season four. The actors' wages increased once again from seasons 5 to 7, reaching $350,000 per episode. This exponential growth continued until the series ended in 2019. It is reported that Galecki earned $900,000 per episode of Big Bang Theory between 2007 and 2019. In addition, the cast managed to negotiate a deal that entitled them to 1 percent of the show's backend equity. This means that the cast, including Galecki, will earn millions of dollars for countless years to come.

Acting Style: Galecki frequently plays nerdy or artistic characters – often with a soft side. He has excelled in these roles since he began his acting career as a child. That being said, the actor has shown his impressive range on more than one occasion. He has played gay characters numerous times, and he performed completely nude in the play The Little Dog Laughed.

Personal Life: At the age of 16, Johnny Galecki's father died in a car accident. He dated co-star Kaley Cuoco for two years when they were in Big Bang Theory together. Despite separating, the pair are reportedly on good terms. In 2017, much of Galecki's properties were destroyed in a major Calfornia wildfire. His properties in Santa Margarita featured extensive vineyards. In 2018, the actor began dating Alaina Meyer, and a year later they had a son together.

Awards: In 1994, Galecki won a Young Artist Award for "Best Youth Comedian" as a result of his performance in Roseanne. He also won a TV Land Award in 2008. In 2012, he was the recipient of a Satellite Award for Best Actor in a Series, Comedy, or Musical. 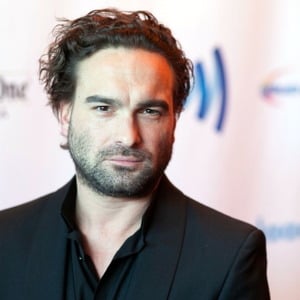