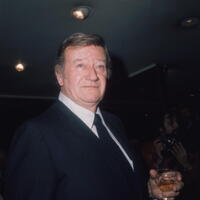 What was John Wayne's Net Worth and Salary?

John Wayne was an American film actor, director, and producer who had a net worth of $7 million at the time of his death in 1979. That's the same as around $25 million in today's dollars after adjusting for inflation. The value of his estate was made public soon after his death. The estate included $1 million in real estate and around $6 million in personal assets/investments. He was earning $100,000 per year in passive income from investments and royalties, roughly $350,000 in today's dollars. Wayne owned property in Arizona, Newport Harbor and on the Puget Sound in Washington.

He was an Academy Award-winning actor who was among the top box office draws for three decades. Some of his best known works include "The Big Trail", "Stagecoach", "The Quiet Man", "The Searchers", "All the King's Men", and "True Grit".

Marion Michael Morrison, better known as John Wayne, was born in Winterset, Iowa, on May 26, 1907. He was born as Marion Robert Morrison, and his parents changed his middle name to Michael after deciding to name their next son Robert. While he was growing up, Wayne's family moved first to Palmdale, California, before moving to Glendale, California, in 1916. There, his father, Clyde Leonard Morrison, worked as a pharmacist. Wayne attended Glendale Union High School, and was both a star student and athlete, taking part in activities like joining the debate team as well as the football team. He continued his education at the University of Southern California, where he majored in pre-law and also played on the football team there. However, he broke his collarbone while bodysurfing, which left him unable to play sports. Subsequently, he lost his athletic scholarship and had to leave university.

A legendary actor who was an icon of rugged masculinity, Wayne was known for his distinctive calm voice, his walk, and his height. During his career, Wayne starred in 170 motion pictures, and he was primarily typecast in Western films. He first entered into the world of entertainment when he began working for Fox Film Corporation, and director John Ford hired him as a prop boy and extra. He moved up through the ranks, first landing bit parts and various minor roles, until director Raoul Walsh saw him moving studio furniture and subsequently cast him in his film "The Big Trail" (1930) as the main lead. "The Big Trail" was one of the first big-budget films of the sound era shot outdoors, and although it is highly regarded by many modern critics, it was considered a big commercial failure at the time. A such, Wayne was relegated to several smaller roles following the flop of his debut film, and he also starred in what he estimates to be about 80 low-budget horse opera films from 1930 to 1939.

Wayne's breakthrough role came in 1939, with John Ford's film "Stagecoach". Ford had initially had a hard time getting the film financed, in large part due to Wayne's B-movie status and previous track record. He eventually succeeded in getting the film off the ground, and it was a smash hit, turning Wayne into a mainstream star and household name. Wayne would go on to appear in almost two dozen John Ford films over the next twenty years. 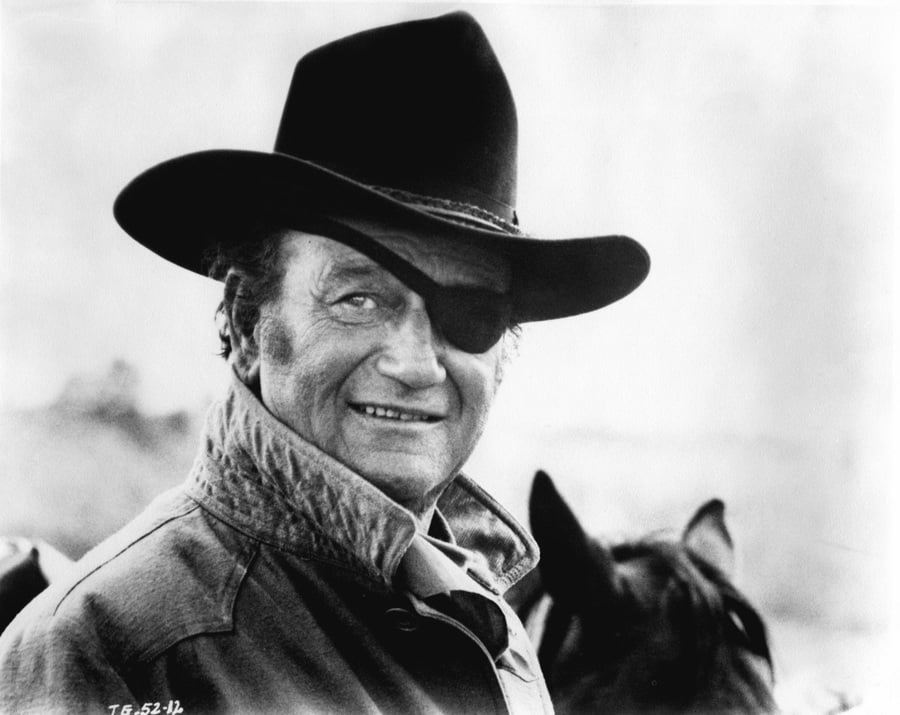 When America entered World War II, Wayne did not serve in the military, as he was exempt from service due to his age and family status. However, in 1943 and 1944, he did tour American bases and hospital in the South Pacific for three months with the USO. On this trip, he also helped discreetly assess on behalf of the Office of Strategic Services (OSS)—the early form of the modern CIA—whether General Douglas MacArthur was hindering the work of the OSS. In 1941, Wayne starred in his first color film, "Shepherd of the Hills", co-starring with Harry Carey. During the 1940s, he starred in films like "Reap the Wild Wind" (1942), "Flying Tigers" (1942), "A Lady Takes a Chance" (1943), "Tall in the Saddle" (1944), "Dakota" (1945), "Red River" (1948), "Wake of the Red Witch" (1948), and "Sands of Iwo Jima" (1949). Eventually, he went on to win an Academy Awards for Best Actor for the film "True Grit" (1969), as well as an award for Best Picture as the producer for "The Apartment" (1960). His final on-screen performance was in 1976, when he starred in "The Shootist" as an aging gunfighter battling cancer.

In addition to his on-screen acting work, Wayne also frequently appeared as a guest on various radio programs, often in dramatic roles. For six months in 1942, he actually starred in his own radio adventure series called "Three Sheets to the Wind". He also worked as a director, directing the films "The Alamo" (1960) and "The Green Berets" (1968). He also served as a producer for "The Alamo", and it was nominated for Best Picture at the Academy Awards. He served as producer for many other films and projects but was uncredited for most of them. 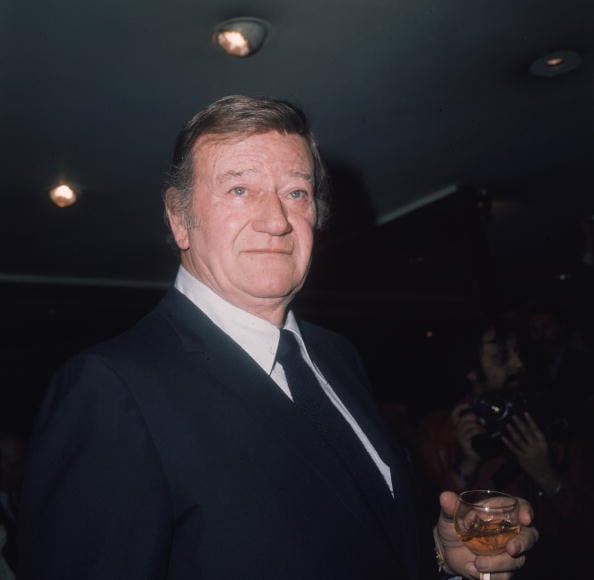 
Wayne was married three times and divorced twice. He was fluent in Spanish and his three wives were all of Latin decent. He also had several high-profile affairs, such as with actress Merle Oberon from 1938 to 1947, and with his former secretary Pat Stacy from 1973 until his death.

He had seven children, four with his first wife and three with his second wife; several of his children also went on to enter the film and television industry.

Wayne died of stomach cancer on June 11, 1979. He previously had been diagnosed with lung cancer in 1964, and had his entire left lung and four ribs removed via surgery. Two years after his death, the American Film Institute named him 13th among the Greatest Male Screen Legends of All Time. He has also received two of the highest civilian decorations recognized by the U.S. government: the Congressional Gold Medal, which was awarded to him on May 26, 1979; and the Presidential Medal of Freedom, which was posthumously awarded to him on June 9, 1980.