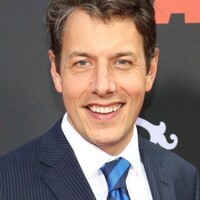 John Ross Bowie net worth: John Ross Bowie is an American actor and comedian who has a net worth of $3 million. John Ross Bowie was born in New York City, New York in May 1971. He is best known for playing the role of Barry Kripke on the television series The Big Bang Theory. Bowie is a performer at the Upright Citizens Brigade Theater and starred in commercials for the Ford Motor Company. He is also a former member of the pop punk band Egghead. Bowie has had recurring roles in the TV series A.U.S.A., Reno 911!, Children's Hospital, Retired at 35, Episodes, The Wrong Mans, Chasing Life, and The Big Bang Theory. He has also starred in the movies Road Trip, Blackballed: The Bobby Dukes Story, Life of the Party, The Santa Clause 3: The Escape Clause, Because I Said So, Wild Girls Gone, Sex Drive, He's Just Not That Into You, Fully Loaded, Dealing, Waking, iSteve, The Heat, and Jason Nash is Married. John married actress Jamie Denbo in 2004.