How much is John Hannah Worth?

John Hannah Net Worth: John Hannah is a Scottish actor who has a net worth of $4 million. John Hannah was born April 23, 1962 in East Kilbride, Scotland. He is best known for his appearances in Richard Curtis's Four Weddings and a Funeral (1994), Sliding Doors (alongside Gwyneth Paltrow) (1998) and Stephen Sommers' Mummy series (1999, 2001, 2008). His television roles include Dr Iain McCallum in McCallum (1995–1998); D.I. John Rebus in Rebus (2000–2001); Jack Roper in New Street Law (2006–2007); Jake Osbourne in Cold Blood (2007–2008), Jack Cloth in A Touch of Cloth, Quintus Lentulus Batiatus in Spartacus (2010–2011) and Jason's father (Aeson) in the BBC series Atlantis. The youngest of three children, John Hannah was an apprentice electrician for four years before giving up this line of work after being accepted to the Royal Scottish Academy of Music and Drama in Glasgow. He eventually got his big break when he was cast as Matthew in Four Weddings and a Funeral. Soon after his role as the epileptic police officer Franky Drinkall in Out Of The Blue, John Hannah showed his philanthropic side in his support for the Epilepsy Association of Scotland. Also, for a prolonged period of time, John Hannah was a spokesman for Oxfam's Cut Conflict Campaign. He currently resides in London with his wife Joanna Roth and their two children. 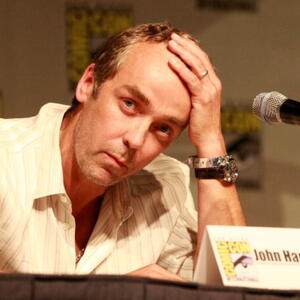