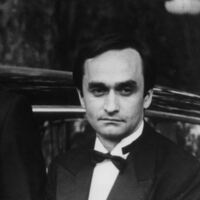 John Cazale Net Worth: John Cazale was an American actor who had a net worth of $2 million dollars. John Holland Cazale was born in Revere, Massachusetts in August 1935 and passed away in March 1978. All five films he appeared in were nominated for the Academy Award for Best Picture. His first appearance came in the 1962 short The American Way. He appeared in an episode of N.Y.P.D. in 1968. Cazale starred as Fredo in The Godfather in 1972, Stan in The Conversation in 1974, Fredo Corleone in The Godfather: Part II in 1974, Sal in Dog Day Afternoon in 1975, and Stan in The Deer Hunter in 1978. He also played the role of Fredo Corleone in the 1977 mini-series The Godfather: A Novel for Television. Archival footage of John was put into The Godfather Part III. He met Al Pacino after moving to New York and acted on stage with Robert De Niro. He dated actress Meryl Streep and worked with her as well. Cazale was nominated for a Golden Globe Award for Best Supporting Actor for Dog Day Afternoon in 1976. John was diagnosed with terminal lung cancer but chose to continue acting. John Cazale passed away on March 12, 1978 at 42 years old.