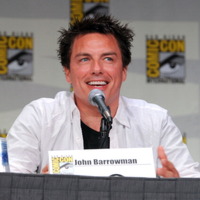 John Barrowman net worth: John Barrowman is a Scottish and American actor, singer, dancer, and writer who has a net worth of $4 million. John Barrowman was born in Glasgow, Scotland in March 1967. He holds both American and British citizenship and his family moved to the United States in 1975. He studied performing arts at the United States International University and went on to star in Anything Goes at London's West End. He has starred in the West End and Broadway in shows such as Miss Saigon and The Phantom of the Opera. He had an uncredited role in the movie The Untouchables in 1987. Barrowman starred as Peter Fairchild in the TV series C.P.W. from 1995 to 1996. From 2000 to 2001 he starred as Peter Williams in the series Titans. He starred as Captain Jack in the TV series Doctor Who from 2005 to 2010 and as Patrick Logan in Desperate Housewives in 2010. Barrowman revived the role of Captain jack harness in the TV series Torchwood from 2006 to 2011 and Torchwood: Web of Lies in 2011. Since 2012 he has starred as Malcolm Meryln in the television series Arrow. He has also starred in the movies The Producers and Zero Dark Thirty.