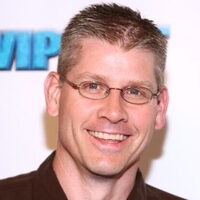 John Anderson net worth: John Anderson is an American sportscaster who has a net worth of $8 million dollars. Born in Green Bay, Wisconsin, John Anderson graduated from the University of Missouri with a degree in Journalism. He was an athlete in college, competing in the high jump as part of the track and field team. He began working as a volunteer sportscaster for the college station, KOMU-TV. This led to jobs with KTUL-TV and KOTV-TV in Tulsa, Oklahoma. From there, he relocated to Phoenix, Arizona to work for KPHO-TV. He was subsequently hired by ESPN-TV. He has been working as a host for ESPN SportsCenter since 1999. In addition to his work for ESPN, he also serves as sportscaster for the MLB Network, and co-hosts the reality show, "Wipeout" on ABC. He received the Bill Teegins Oklahoma Sportscaster of the Year Award in 2012. He currently lives in Southington, Connecticut.