How much is Joey Lawrence Worth?

Joey Lawrence Net Worth: Joey Lawrence is an American actor, musician, and songwriter who has a net worth of $250,000. He is best known for his work in on the television shows "Gimme A Break!," "Blossom," "Brotherly Love," and "Melissa & Joey."

Early Life and Career: Joey Lawrence was born Joseph Lawrence Mignogna Jr. on April 20th, 1976 in Abington, Pennsylvania. His mother worked as an elementary school teacher and then personnel manager, and his father was an insurance broker. He is of Italian, Scottish, and English descent. When he was a child, his parents changed their surname to from Mignogna to Lawrence.

He has two younger brothers, Matthew Lawrence and Andrew Lawrence who also work in the entertainment industry. He attended Abington Friends School in Jenkintown, Pennsylvania. He started acting at a very young age, and his first role was in a Cracker Jack television commercial. When he was only five years old, he appeared on "The Tonight Show Starring Johnny Carson" and sang "Give My Regards to Broadway." When he was six years old, he appeared in the television movie "Scamps," and had guest star roles on the television shows "Diff'rent Strokes" and "Silver Spoons." He got his breakout role in 1983 when he was cast as Joey Donovan in the NBC sitcom "Gimme A Break!" He joined the show in its third season, and he remained as a cast member until the series concluded in 1987. He was nominated for two Young Artist Awards in the years 1984 and 1985. While on the sitcom, he continued to appear in television movies and on shows. He was featured in the television films "Wait till Your Mother Gets Home" and "Little Shots," and he had a supporting role in the 1985 family comedy "Summer Rental." In 1988, he had a prominent role in the science fiction horror film "Pulse" and voice acted the leading character in the animated film "Oliver & Company." The next year he had a starring role in the television film "Adventures in Babysitting." In 1990, he starred alongside John Travolta in the crime drama film "Chains of Gold" and played the role of a street kid who sold crack for a drug syndicate run by youths.

Lawrence received his next sitcom role in 1990 with the NBC television show "Blossom," which proved to be a hit for the network. It ran for five seasons, ending in 1995. Again, he managed to take on other roles during his time on the sitcom including in the 1994 crime comedy "Radioland Murders," which was co-written by George Lucas and the 1995 animated Walt Disney film "A Goofy Movie." Also in 1995, he got his next prominent television role in aptly titled series "Brotherly Love," in which he starred alongside both of his brothers. The show focused on the brothers' relationship, and it ran from 1995 until 1997. He ended the decade with a leading role in the comedy horror film "Tequila Body Shots."

Post 2000s Career: Lawrence began the new millennium with a role in the horror film "Urban Legends: Final Cut," and he starred alongside Claudia Schiffer and Christine Taylor in the comedy film "Desperate But Not Serious." In 2001, he starred in the thriller "Do You Want To Know A Secret?," and in the next year, he appeared in the thriller "Pandora's Box." His work in film as an adult tended to be in comedies or horror movies, and many were panned by critics. He shined on the small screen, and he returned to a consistent television role with the dramedy show "American Dreams," which also featured Brittany Murphy. It ran from 2002 to 2005 and won two Primetime Emmy Awards. In 2003, he was cast in the short-lived television show "Run of The House," which was about a group of siblings living without their parents. Before being cast in another television series, he appeared in the television films "Love Rules," "Confessions of a Sociopathic Social Climber," and "Bow." He had a recurring guest role in the fourth season of the sitcom "Half & Half," which aired in 2005 and 2006. The remainder of the 2000s were unremarkable, and he sporadically appeared in videos, television movies, and as a guest star on shows.

In 2010, Lawrence was cast as lead alongside Melissa Joan Hart in the ABC Family sitcom "Melissa & Joey." The show was a hit for ABC and enjoyed high ratings until viewership began to decline in its fourth season. It followed local politician Mel Burke and Ponzi Scheme victim Joey as they struggle comedically to raise Burke's niece and nephew. The series wasn't renewed for a fifth season and ended in 2015. The show's opening song was "Stuck with Me," which was performed by Lawrence. He then began a recurring guest role on the show "Hawaii Five-0"

Music Career: Lawrence has always had a passion for music, and he was only sixteen when he released his first album "Joey Lawrence." It was commercially successful with several songs charting, but he did not make music his focal point and prioritized his acting career.

Personal Life: Joey was married to Michelle Vella from 2002 to 2005. He married Chandie Yawn-Nelson in 2005. They had two daughters. They filed for divorce in 2020. Interestingly, Joey and Chandie actually met in 1993 at Disney World when he was 16 and on vacation. They had an ice cream date and joked about getting married at the theme park. Fast forward to 2005 and they made that dream come true. 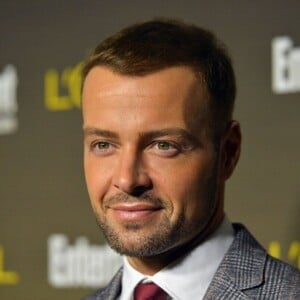