Joaquin Cosio Net Worth: Joaquin Cosio is a Mexican actor who has a net worth of $3 million. Joaquin Casio was born in Tepic, Nayarit, Mexico in 1962. He started off his career as a radio script writer and radio personality. He later taught communications and literature at the same university and became an outspoken social activist. Cosio's first poetry book Talking Another Voice was published in 1992 and won several awards. He started training as an actor in 1983. Cosio won the National Literature Prize for writing his first play Tomochic: Or the day the world ended in 1994. He has acted in more than 50 plays and 600 live performances. Cosio joined the National Theater Company in 1999. Cosio made his film debuts in 2012 in The Blue Room and Una de dos. In 2011 he starred as Javier Rubalcava in the TV series El Diez. Joaquin starred in the 2013 TV series Mentir para vivir. He has also starred in films such as Quantum of Solace, Saving Private Perez, A Better Life, Savages, A Night in Old Mexico, The Lone Ranger, and Cantinflas. Cosio has won Best Supporting Actor Awards from the Ariel Awards and the Mexican Cinema Journalists Awards. He became the first Mexican recipient of the MGM My Favorite Award in 2012. 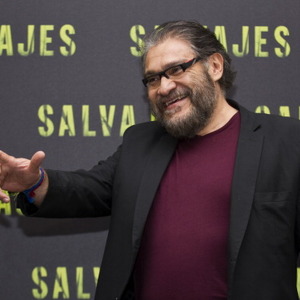