Joan Crawford Net worth: Joan Crawford was an American actress and theatrical performer with who had a net worth equal to $8.5 million dollars at the time of her death in 1977. Technically her estate was valued at $2 million. She is most recognized for her roles in films during the Hollywood silent film and golden eras including "Mildred Pierce" and "The Damned Don't Cry."

Early Life: Joan Crawford was born Lucille Fay LeSueur on March 23, 1904 in San Antonio, Texas. Her mother was of Irish and Swedish descent. Her father worked as a launderer and was of French and Dutch ancestry. Her paternal great-grandparents were first cousins. She had a turbulent childhood with her parents separating just after her birth and her older sister dying before it. She has an older brother, Hal Hays LeSueur, who was an Oscar-winning actor. Her mother remarried, and the family relocated to Lawton, Oklahoma where her stepfather ran the Ramsey Opera House. Watching the shows and being able to see theater in a more intimate way at the opera house piqued her interest in the performing arts. As a young child, she knew she wanted to be a dancer, but an attempt to cut class jeopardized the possibility. In elementary school, she had an incident in which she escaped from piano lessons by jumping out of the classroom window. She landed on a broken milk bottle and had to have three surgeries to repair the damage. Hawaiian poet and US Army veteran Don Blanding was present at the time and tended to her wounds. He went on to make the experience a focus of one of his poems.

Crawford's stepfather was charged of embezzlement in 1917, and after he was acquitted of the crime, the family moved to Kansas City, Missouri because he could no longer find work in Lawton. Her stepfather chose to put her in a private Catholic school, and she remained there as a working student after her parents divorced. Because of her working student status, Crawford didn't receive an adequate education, and this resulted in her dropping out of college due to the material being too advanced.

Career Highlights: She was offered a contract for $75 dollars a week with MGM in 1924, but she initially only received small and sometimes unbilled roles. This was primarily due to MGM's head of publicity, Pete Smith, not liking her last name, LeSueur, and believing it to sound similar to "sewer." To fix this issue, Smith presented readers of the "Movie Weekly" magazine with a poll of names in the form of a game. The top pick from the national poll was "Joan Arden," but after they realized another actress was born with that name, they settled on the second most popular "Crawford." She didn't care for the surname and wanted her first name to be pronounced "Jo Ann," but those were minor gripes.

She was continually frustrated by the small size and low caliber of the roles in which she was being cast. Her ambition and determination led to her being given bigger parts, and Crawford displayed those qualities throughout her career. She worked at improving her dance skills and started to perform in competitions around town to increase her name recognition. The strategy worked, and she starred in the 1925 silent film "Sally, Irene, and Mary." Soon, Crawford was frequently being tapped by MGM to play the love interest in their films. When sound movies became more popular, some actors struggled to transition or elected not to do sound movies, but Crawford transitioned to the enhanced medium seamlessly in the 1929 film "Untamed."

She spent the 20s refining her persona, one that was, according to F. Scott Fitzgerald, the best example of a flapper. She portrayed a kind of stoic sophistication and timeless glamour. She represented the ideal, free-spirited, chic kind of woman, and this was a persona that women of the 1920s wanted to emulate. By the mid-thirties, MGM had begun casting her in more sophisticated roles that highlighted her glamorous aspects. In 1932, she starred in the Oscar winning film "Grand Hotel" with Greta Garbo. She filmed three romantic dramas with Clark Gable from 1934 to 1936. She was one of MGM's most popular actresses of the decade. In the late 1930s, her popularity had declined, and she was being given minor roles more sporadically. In 1938, a controversial article titled "Box Office Poison" argued that actors such as Greta Garbo, Mae West and Crawford be let out of their contracts with large movie studios because their films weren't selling tickets. It made the rounds in the film circles and started the trend of "Box Office Poison" lists.

Crawford signed a $500,000 three-film deal with Warner Bros in 1943, and her first film "Hollywood Canteen" received three Oscar nominations. She continued to rise out of her slump with her 1945 film "Mildred Pierce," which was a hit at the box office and with critics. Although the director protested her being cast and was critical of her throughout, she won an Academy Award for Best Actress. She continued to produce successful films for Warner Bros. throughout the decade but asked to be released in 1952 because she felt they were giving her weak films. After she left, she filmed the critical success "Sudden Fear," which earned her an Academy Award nomination in 1953. Her career was stable but unremarkable throughout the rest of the decade. She would receive a BAFTA nomination for the 1962 film "Whatever Happened to Baby Jane?" but that was to be her last hit.

Personal Life: Crawford married four times with each marriage being four years long. She adopted a daughter in 1940, a son during her marriage to Phillip Terry in 1943, and a set of twins in 1947. She has a star on the Hollywood Walk of Fame that she was awarded in 1960. On May 10th, 1977 Joan Crawford died of a heart attack. She famously disinherited her children Christina and Christopher from the will, citing "reasons which are well-known to them". They sued the estate and eventually received a total of $55,000. 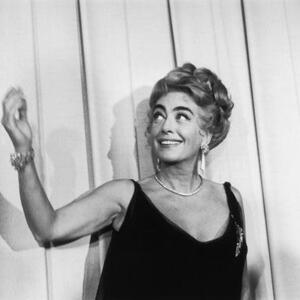