What is Joan Collins' Net worth?

Joan Collins is an English actress and author who has a net worth of $20 million. She is best known for her role as Alexis Colby on the soap opera "Dynasty," which ran from 1981 to 1989. Joan appeared in 195 of the show's 220 episodes.

Joan Henrietta Collins was born on May 23rd, 1933 in London England. Her father was a talent agent whose clients included the likes of Shirley Bassey, the Beatles, and Tom Jones. He was Jewish and a native of South Africa. Her mother was from England and had Anglican heritage. She has two younger siblings, and her younger sister, Jackie Collins, was a best-selling novelist who sold 500 million books during her lifetime. She attended the independent all-girls Francis Holland School in London. When she was nine years old, she was cast in Henrik Ibsen's play "A Doll's House." At the age of sixteen, she was already training as an actress at the Royal Academy of Dramatic Arts. A year later, she signed with British film studio Rank Organization.

Collins made her film debut in 1951 with the comedy "Lady Godiva Rides Again." She followed that appearance with a minor role in "The Woman's Angle" and a more prominent role in the 1952 drama "Judgement Deferred." Her breakthrough role was in her third film of 1952 "I Believe in You." Her performance in the drama lead to the British press labelling her as "Britain's bad girl." In 1953, she had a supporting role in England's first X rated film "Decameron Nights" as well as in the sports drama "The Square Ring." Between shooting movies, she starred in plays around London including "The Seventh Veil," "Claudia and David," and "The Skin of Our Teeth." In 1954, she was cast as a princess in the drama "The Land of the Pharaohs," and her performance was so striking that it landed her a seven-year contract with 21st Century Fox.

Her Hollywood debut came in 1955 with the historical drama "The Virgin Queens," which also featured Bette Davis. Later that year she starred in the drama "The Girl in the Red Velvet Swing." She had a leading role in the 1956 Golden Globe-nominated comedy musical "The Opposite Sex," which also starred Leslie Nielsen. She starred as Paul Newman's love interest in the 1958 romance "Rally Round the Flag, Boys." In 1960, she was initially the top pick for the part of the title character in the classic film "Cleopatra," but the studio went with Elizabeth Taylor instead. This led Collins to drop out of production for the film "Sons and Lovers" and to request to be released from her contract with 21st Century Fox. She agreed to star in the epic drama "Esther and the King" prior to departing the studio in 1960.

While free from contractual obligations, Collins filmed the 1962 comedy musical "The Road to Hong Kong" with Bing Crosby and Bob Hope. She subsequently took a lighter workload to focus on starting a family after her marriage in 1963. In the late sixties, she had minor roles in several films and guest appearances on television shows including "Star Trek" and "Mission: Impossible." In 1970, she went back to England and starred in a series of horror and thriller films. After shooting films in Italy and Spain, she returned to the UK and shot back to stardom with the film version of her sister Jackie Collins' book "The Stud." The film, released in 1978, was produced on a budget of $600,000 and grossed over $20 million internationally. With her career revived, she returned to the theater stage at London's West End with the title role in the 1980 production "The Last of Mrs. Cheyney." 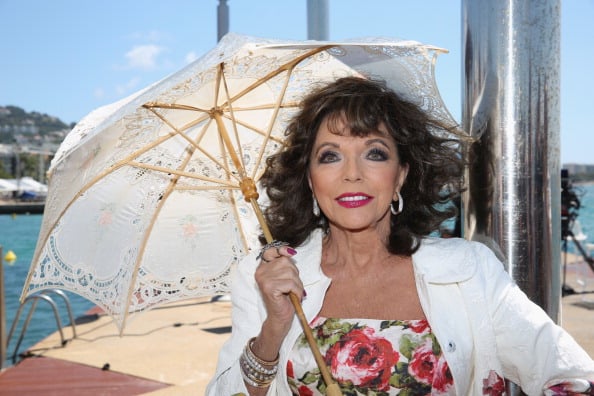 "Dynasty" and Other Work

In 1981, she moved back to the US to play the character of Alexis Colby, an oil tycoon's ex-wife, on the second season of the soap opera "Dynasty." She's largely credited as being the reason for the show becoming a success, and her addition to the cast dramatically improved its ratings. "Dynasty" was popular internationally, and for her work in the series, Collins would receive five Golden Globe nominations with a win in 1932. She was nominated for an Emmy in 1984, and she received two People's Choice Award nominations as well as a win in 1985 for Favorite Actress. All of her critical accolades were awarded after she had been acting for over twenty years. She received a star on the Hollywood Walk of Fame in 1983 recognizing her achievements throughout her career. During the filming of "Dynasty," she starred in the film "The Nutcracker" and several made-for-television movies. She produced and starred in the popular 1986 CBS miniseries "Sins" and the miniseries "Monte Carlo," released the following year.

Although the show would have a reunion special in 1991, "Dynasty" concluded in 1989, and Collins retuned to theater with a role in the Broadway play "Private Lives," in which she performed throughout the US and at London's West End. She made guest appearances on television shows over the course of the nineties and acted in several feature films including the 1995 comedy "A Midwinter's Tale," the 1999 musical "Joseph and the Amazing Technicolor Dreamcoat," and the 1999 period comedy "The Clandestine Marriage." In the 2000s, she had brief recurring roles on the television shows "Guiding Light" and "Verbotene Liebe." She made a reappearance on mainstream television in the 2010s with prominent roles on the popular shows "American Horror Story" and "The Royals."

Collins has been married five times. Her first marriage was to Irish actor Maxwell Reed. She married English actor Anthony Newley in 1963 and had two children with him. She had a daughter with her third husband, businessman Ron Kass. After they separated, she married Swedish pop star Peter Holm, and followed her divorce from him with a fifth marriage to Percy Gibson in 2002. She has homes in New York City, Los Angeles, London, and France.

In 2007 Joan and Percey paid $2.7 million for a large condo in West Hollywood, California. They listed this condo for sale in 2017 for $4.5 million. She sold the unit soon after it was listed for $4.4 million.

Percey and Joan's villa in St. Tropez, France is absolutely stunning and could be worth $10+ million. In August 2020, Joan caused a bit of an online commotion after complaining about the lack of social distancing by people in the port of St. Tropez. Just three months earlier she complained publicly about the UK government forcing people to wear masks. Some people found her yacht post arrogant. 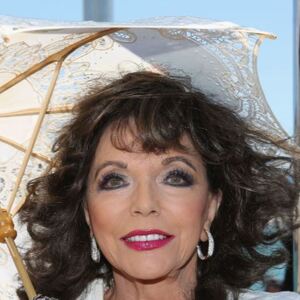