How much is Joan Allen Worth?

Joan Allen net worth: Joan Allen is an American actress who has a net worth of $8 million. Joan Allen was born in Rochelle, Illinois in August 1956. She has acted in film, television, and theatre and has won a Tony Award. Allen started her career with the Steppenwolf Theatre Company in 1977 and debuted on Broadway in Burn This in 1987. Allen starred in the television series Luck in 2012 ad Claire Lachay and The Killing in 2014 as Colonel Margaret Rayne. She has starred in the movies Manhunter, Zeisters, Peggy Sue Got Married, Tucker: The Man and His Dream, In Country, Ethan Frome, Searching for Bobby Fischer, Josh and S.A.M., Mad Love, Nixon, The Crucible, The Ice Storm, Face/Off, Pleasantville, All the Rage, When the Sky Falls, The Contender, Off the Map, The Notebook, The Bourne Supremacy, Yes, The Upside of Anger, Bonneville, The Bourne Ultimatum, Death Race, Hachi: A Dog's Tale, Good Sharma, The Bourne Legacy, and A Good Marriage. Allen has won 35 awards and has been nominated for three Academy Awards, three Golden Globes, and three Primetime Emmy Awards. 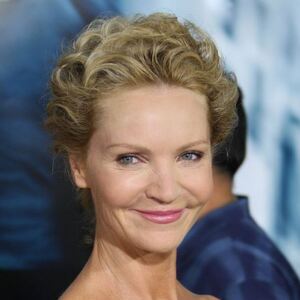