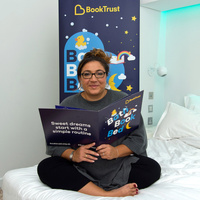 Jo Frost Net Worth: Jo Frost is an English nanny and television personality who has a net worth of $1.5 million. Jo Frost was born in London, England in June 1971. She was best known for being featured on the reality TV show Supernanny. She has more than 20 years of experience working in childcare in both Britain and the United States. She was featured in Supernanny from 2004 to 2010 and served as a consulting producer for the 2009-10 season of the program. She has also been featured on TV series such as Jo Frost Extreme Parental Guidance, Family S.O.S. with Jo Frost, and Jo Frost: Family Matters. Jo Frost: Family Matters debuted in April 2014 on ITV. Frost has also authored the books Supernanny: How to Get the Best from Your Children, Ask Supernanny: What Every Parents Wants to Know, and Jo Frost's Confident Baby Care. She is credited the "the naughty step" which is a variation of the time-out method. As a voice actress she appeared in an episode of the TV series Jake and the Never Land Pirates in 2014. Frost was nominated for Favorite Nanny at the 2008 TV Land Awards.