Jill Hennessy net worth: Jill Hennessy is a Canadian actress and musician who has a net worth of $12 million. Jill Hennessy is best known for her television role on Crossing, but has also appeared in several television shows and films such as Robocop 3 and Most Wanted. Hennessey was born in Edmonton, Alberta on November 25, 1968.

She has a younger brother, John Paul Hennessy, Jr., and an identical twin sister, Jacqueline, who is a magazine writer and TV show host in Canada. She graduated from Grand River Collegiate Institute in Kitchener, Ontario and used to busk in the Toronto Subway. Prior to her work on Crossing Jordan, Hennessy was short listed for the role of Dana Scully on The X-Files, and also co-starred in the movie Dead Ringers with her twin sister. In 2001, she portrayed Jackie Kennedy in the film Jackie, Ethel, Joan: The Women of Camelot; and in 2003 made a cameo appearance in the film Abby Singer. Her breakout role in the TV show Crossing Jordan began in 2001 and continued until the shows end in 2007. Hennessy has also recorded an album called "Ghost in My Head" that was released in 2009. She is multi-lingual, speaking English, Italian, French, Spanish, and German. She plays the guitar, sings, and enjoys riding motorcycles with her husband, Paolo Mastropietro. The couple has a son named Marco, who was born in 2003 and a second son, Gianni, who was born in 2007. 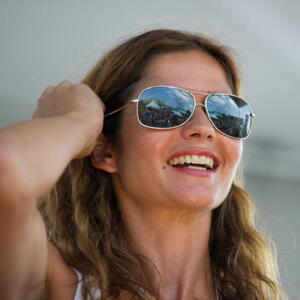