Jessie Usher net worth: Jessie Usher is an American actor who has a net worth of $4 million. Jessie Usher was born in Maryland in February 1992. He graduated as his class salutatorian and made the Dean's List in college. He moved to Los Angeles in 2003 and first appeared in the TV series Without a Trace in 2005. Usher starred as Lyle Hugginson in the television series Level Up from 2012 to 2013. From 2014 to 2015 he starred as Sam Calloway in the TV series Survivor's Remorse. Usher starred in the 2010 movie Beautiful Boy and starred as Jamal in the 2013 film InAPPropriate Comedy. He starred as Tayshow Lanear in the 2014 movie When the Game Stands Tall and as Dylan Hiller in the 2016 film Independence Day: Resurgence. Usher is scheduled to star in the upcoming movies Almost Christmas and Stronghold. He has also appeared in episodes of the TV series Hannah Montana, Lincoln Heights, Numb3rs, The Mentalist, and Criminal Minds. Usher won a Hamptons International Film Festival Award for Breakthrough Performer for Survivor's Remorse in 2015. In 2016 he won a CinemaCon Award for Independence Day: Resurgence. 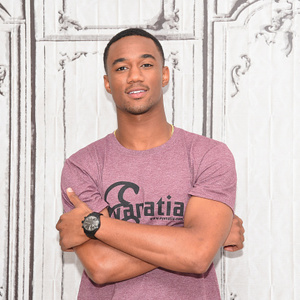