Jessica Tandy net worth: Jessica Tandy was a British actress who had a net worth equal to $20 million after adjusting for inflation at the time of her death in 1994. Jessica Tandy was born in Hackney, London, England in June 1909 and passed away in September 1994. She appeared in more than 100 stage productions in addition to more than 60 acting credits on film and television.

Tandy starred acting on stage in London at 18 years of age and won a Tony Award in the original Broadway production of A Streetcar Named Desire in 1948. She starred in several films including The Valley of Decision, A Woman's Vengeance, September Affair, Hemingway's Adventures of a Young Man, The Birds, The World According to Garp, Still of the Night, The Bostonians, Cocoon, *batteries not included, Cocoon: The Return, Driving Miss Daisy, Fried Green Tomatoes, and more. Tandy won an Academy Award for Best Actress in a Leading Role for Driving Miss Daisy in 1990. She also won a Golden Globe Award, Primetime Emmy Award, BAFTA Award, and a Star on the Hollywood Walk of Fame at 6284 Hollywood Blvd. Tandy was married to Jack Hawkins and Hume Croyn. Jessica Tandy passed away on September 11, 1994 at 85 years old from ovarian cancer. 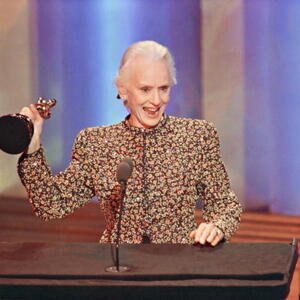