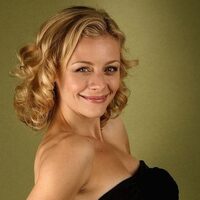 Jessica Cauffiel Net Worth: Jessica Cauffiel is an American actress and singer who has a net worth of $600 thousand dollars. Jessica Cauffiel was born in Detroit, Michigan in March 1976. She is best known for her role as Tori in the movie White Chicks. Jessica graduated from the University of Michigan School of Music. She performed with bands including Tribe of Zoe and Jazodity. She also was a singer on a cruise ship and in blues and jazz clubs. Cauffiel acted in theater off-Broadway. Her television debut came in the series Law & Order in 1998. Her first film role was as Susan Clark in the 1999 movie The Out-of-Towners. She appeared in episodes of Frasier and Stark Raving Mad in 1999. Jessica appeared in the movies Road Trip and Urban Legends: Final Cut in 2000. From 2002 to 2003 she had a recurring role as Milan in The Drew Carey Show and from 2006 to 2007 as Tatiana in My Name is Earl. Cauffiel has also starred in the films Valentine, Legally Blonde, You Stupid Man, Legally Blonde 2: Red, White & Blonde, Stuck on You, D.E.B.S., White Chicks, Guess Who, The World's Fastest Indian, and Hoot. Her last appearances came in the TV movie Ice Dreams and the short Bed Ridden in 2009. She also produced the short Bed Ridden and the 2011 documentary The Original Mind. Jessica performed in India for the 14th Dalai Lama and 20,000 other monks in 2014.