How much is Jessalyn Gilsig Worth?

Jessalyn Gilsig Net Worth: Jessalyn Gilsig is a Canadian actress who has a net worth of $3 million. Jessalyn Gilsig was born in Montreal, Quebec, Canada in November 1971. She started acting at 12 years old and studied at McGill University and Harvard University's Institute for Advanced Theater Training. She started as a voice actress and worked in the short Mascarade in 1984. From 1991 to 1992 she provided the voice of Gertrude of Griswald in the TV series Young Robin Hood. Gilsig starred as Lauren Davis on the series Boston Public from 2000 to 2002. She had recurring roles in the TV series NYPD Blue, Prison Break, Friday Night Lights, Nip/Tuck, CSI: NY, Heroes, and Imaginary Bitches. From 2009 to 2012 Jessalyn starred as Terri Schuester in the series Glee. Starting in 2013 she starred in the series Vikings as Siggy. She has starred in the movies The Horse Whisperer, See This Movie, Flood, Prom Night, The Stepfather, About Fifty, and Somewhere Slow. Gilsig won a Screen Actors Guild Award in 2010 and has been nominated for a Daytime Emmy and Teen Choice Award. Jessalyn is married but separated from Bobby Salomon and have one daughter together. 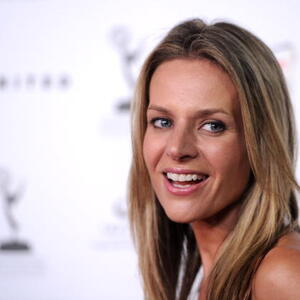