Jerry Maren Net Worth: Jerry Maren was an American actor who had a net worth of $300 thousand dollars at the time of his death in 2018. Jerry Maren was born in Boston, Massachusetts in January 1920. Maren is best known for playing the role of a Munchkin member of the Lollipop Guild in the 1939 film The Wizard of Oz. He is the last confirmed surviving cast member of the movie. Maren became the sole living member of the film when Ruth Duccini passed away in January 2014. He made his film debut in The Terror of Tiny Town in 1938. Maren was uncredited for his role as a Lollipop Guild Member in The Wizard of Oz. He starred in the television series Lidsville in 1971, Mary Hartman, Mary Hartman in 1977, and No Soap, Radio in 1982. Maren has also starred in many films including 1978's The Lord of The Rings and The Bad News Bears Go to Japan. He won an Action on Film Award for Outstanding Cast Performance for 2010's Dahmer vs. Gacy. In 2007 he appeared for the Hollywood Star unveiling for the Wizard of Oz Munchkins. He had a hand and footprint ceremony at Grauman's Chinese Theatre in Hollywood in 2013. Maren also played Mayor McCheese in McDonald's ads and Little Oscar for Oscar Mayer. Jerry Maren died in May 2018 at the age of 98. 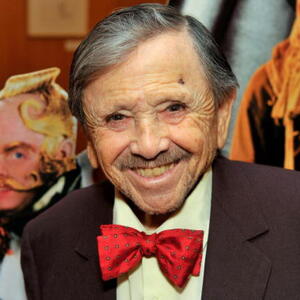