Jenny Mollen Net Worth: Jenny Mollen is an American actress and author who has a net worth of $1 million. Jenny Mollen was born in Phoenix, Arizona in May 1979. Jenny graduated from UCLA's School of Theater, Film, and Television. Her first appearance came in the TV series 18 Wheels of Justice in 2000.

She had a recurring role as Nina Ash on the series Angel from 2003 to 2004. In 2007 she starred as Amy in the short lived series Viva Laughlin and she starred as Tess Nolan 2009 in the TV series Crash. Mollen appeared as Courtney in the series Girls in 2014. She has starred in the films Searching for Haizmann, D.E.B.S, Return of the Living Dead: Rave to the Grave, Cattle Call, My Best Friend's Girl, Off the Ledge, Life Happens, Crazy, Stupid, Love, and Extracted. Mollen won an Award for Merit at the Accolade Competition in 2009 for writing the film Kidnapping Caitlynn. Her book of comedic essays I Like You Just The Way I Am was released in 2004 and made the New York Times best seller list. Jenny married actor Jason Biggs in 2008 and had their first son in 2014. 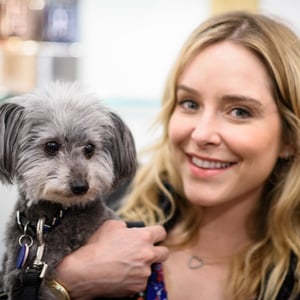