Jennifer Ehle Net Worth: Jennifer Ehle is an American actress who has a net worth of $4 million dollars. Jennifer Ehle was born to an actress mother and author father in 1969 in Winston-Salem, North Carolina. She made her Broadway debut as a toddler in "A Streetcar Named Desire" with her mother. Ehle studied at London's Central School of Speech and Drama and the North Carolina School of the Arts. In 1991, she appeared in her first West End production of "Tartuffe", taking a prize at the Ian Charleson Awards. She catapulted to fame as Elizabeth Bennet in the 1995 mini-series "Pride and Prejudice". For her performance, Ehle won a BAFTA Award. She briefly toured with the Royal Shakespeare Company before appearing in "Paradise Road", "This Year's Love", "Before the Rains", "The King's Speech", "The Ides of March", "Contagion", "The Adjustment Bureau", "Zero Dark Thirty", and "RoboCop". Ehle is set to appear in "Fifty Shades of Grey" as Carla Wilkes. While pursuing her screen acting career, Ehle remained committed to stage productions, earning a Tony Award for Broadway's "The Real Thing". She appeared in "The Philadelphia Story", "Macbeth", "The Coast of Utopia", and "Mr. & Mrs. Fitch". Ehle has been married to her husband, writer Michael Ryan, since 2001. They have two children together, a son and a daughter. 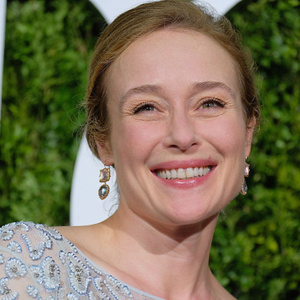