Jenna Ushkowitz net worth: Jenna Ushkowitz is an American stage performer, actress, and writer who has a net worth of $4 million. Jenna Ushkowitz was born on April 28, 1986 in South Korea. At the age of three months she was adopted and raised in East Meadow, New York. Jenna is most notoriously known for her role as Tina Cohen-Chang on Fox hit TV show, Glee. Jenna´s acting career started at the early age of three when she started playing small roles for shows for kids such as Sesame Street. His on-stage performing career kicked off in 1996 when he played the Broadway musical "The King and I". Starting in 2008, she appeared in the Broadway musical "Spring Awakening". When series creator Ryan Murphy was searching for cast for the show Glee, instead of looking in catalogs for actors he went to Broadway to look for the artistic skills the show required. This is how in 2009, Jenna was discovered and offered the role of Tina Cohen-Chang in Glee. Her "crystalline voice" has rendered her great comments, especially after her cover of Cyndi Lauper´s "True Colors". This song hit the world's most important musical charts including No. 66 on the United States "Billboard Hot 100". In 2011, Ushkowitz briefly appeared on Lady Gaga´s musical video "Marry the Night" in which she play´s Gaga´s best friend, Bo. Her greatest achievements have been within Glee, crew with which she has performed on-stage namely with the tour "Glee Live! InConcert!" The show has also earned her a series of Awards including Grammy Awards, collectively with the Glee cast. 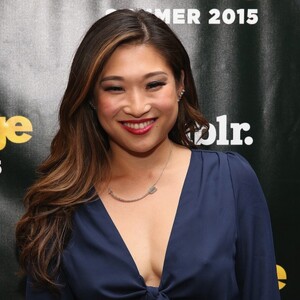