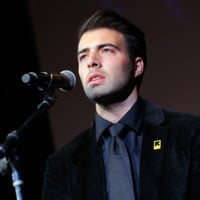 Jencarlos Canela Net Worth: Jencarlos Canela is an American actor, singer/songwriter and musician who has a net worth of $5 million. Jencarlos Canela was born April 21, 1988 in Miami, Florida. He is the older brother of actor Jason Canela. Jencarlos Canela is known worldwide for his appearances in telenovelas as well as for his singing and songwriting talents. At the age of 12 Canela began his musical career as the lead singer of the group Boom Boom Pop. His first two albums were produced by Rudy Pérez at his studio in Miami Beach under the independent label Bullseye Music Entertainment. His first album Búscame debuted at No. 2 in 2009, and in 2011 his second album Un Nuevo Día came in at No. 1 during the first week it was released. In 2012, Canela, in collaboration with Emilio Estefan, recorded the song Sueña for Telemundo's coverage of the 2012 Summer Olympics. He played the protagonist Ángel Salvador in the telenovela Más Sabe el Diablo (2009-2010)—Gaby Espino and Miguel Varoni also starred in the telenovela. In 2010, the movie Más Sabe el Diablo: El Primer Golpe starred Jencarlos Canela, Gaby Espino and Miguel Varoni. In 2011, he joined the telenovela Mi Corazón Insiste along with Carmen Villalobos. In the Telemundo award show Premios Tu Mundo (2012) the telenovela won the award for Novela of the Year and Jencarlos Canela won the Favorite Lead Actor award. Canela reappeared in 2013 in the new Telemundo telenovela Pasión Prohibida with the late actress Mónica Spear. In that same year, Canela won as Favorite Lead Actor for the second time at Telemundo's award show Premios Tu Mundo 2013. Canela won Artist of the Year in the 2013 awards show Premios Juventud, and his song I Love It won the Song of the Summer award. In the 2014 Premio Lo Nuestro awards show, his I Love It video was nominated for Video of the Year. In 2012, Jencarlos Canela signed with Universal Music Latin Entertainment.