What is Jeff Daniels' Net Worth and Salary?


Jeff Daniels is an American actor, musician, and writer who has a net worth of $45 million. Daniels has appeared in more than 80 film and television projects, and he has had a successful career as a Tony-nominated stage actor, performing on Broadway in "Fifth of July" (1980), "The Golden Age" (1984), "Redwood Curtain" (1993), "God of Carnage" (2009–2010), "Blackbird" (2016), and "To Kill a Mockingbird" (2018–2019). Jeff is the founder of the Purple Rose Theatre Company in Chelsea, Michigan, and he has written numerous plays for the organization. He made his big screen debut in 1981's "Ragtime," which he followed up with a performance in the Academy Award winner "Terms of Endearment."

Jeff Daniels was born Jeffrey Warren Daniels on February 19, 1955, in Athens, Georgia. When Jeff was 6 weeks old, his parents, Marjorie and Bob, moved the family to Michigan. Daniels and his siblings, Jodi and John, grew up in a Methodist household in Chelsea, where their father owned a lumber company; Bob also served as the town's mayor in the early 1960s. After graduating from high school, Jeff enrolled at Central Michigan University and got involved in the theatre program, and in 1976, he took part in a Bicentennial Repertory program at Eastern Michigan University's drama school. Guest director Marshall W. Mason invited Daniels to work at New York City's Circle Repertory Theatre, and he appeared in Lanford Wilson's "Fifth of July" during the company's 1977–1978 season. He later appeared in a 1979 production of "The Shortchanged Review" at Second Stage Theatre.

"Fifth of July" moved to Broadway in 1980, and Daniels earned a Drama Desk Award nomination for Best Supporting Actor. That year he also made his television debut on an episode of "Hawaii Five-O," and his film debut came the following year when he played P.C. O'Donnell in "Ragtime." His next film, 1983's "Terms of Endearment," won an Oscar for Best Picture, and he then appeared in 1985's "The Purple Rose of Cairo," which earned him a Golden Globe nomination and inspired the name of his theatre company. Jeff received another Golden Globe nomination for 1986's "Something Wild," and he began the 1990s by starring in "Arachnophobia" and "Welcome Home, Roxy Carmichael." He hosted "Saturday Night Live" in 1991 (he would host again in 1995), then he starred in the 1992 science-fiction film "Timescape" and portrayed Colonel Joshua Chamberlain in 1993's "Gettysburg," a role he would reprise in 2003's "Gods and Generals." In 1994, Daniels appeared in the blockbuster film "Speed," which grossed $350.4 million at the box office, and co-starred with Jim Carrey in the comedy "Dumb and Dumber." The film was a hit, bringing in $247.3 million worldwide, and the duo reprised the roles of Harry Dunne and Lloyd Christmas in 2014's "Dumb and Dumber To."

In 1996, Daniels starred in "Fly Away Home," "2 Days in the Valley," and the Disney film "101 Dalmatians," another hit, with a worldwide gross of $320.7 million. He co-starred with Reese Witherspoon and Tobey Maguire in 1998's "Pleasantville," and he portrayed George Washington in the 2000 television film "The Crossing." In 2002, Jeff starred in "The Hours" with Meryl Streep, Nicole Kidman, and Julianne Moore, and the cast received Best Ensemble honors from the Awards Circuit Community Awards and Gold Derby Awards. He then appeared in the 2004 television film "The Five People You Meet in Heaven" and the 2005 feature films "The Squid and the Whale," "Because of Winn-Dixie," and "Good Night, and Good Luck." Daniels portrayed Alvin Dewey in 2006's Truman Capote biopic "Infamous," then appeared in the political thrillers "Traitor" (2008) and "State of Play" (2009). He co-starred with John Krasinski and Maya Rudolph in 2009's "Away We Go," then he starred in "Paper Man" (2009) and "Howl" (2010). 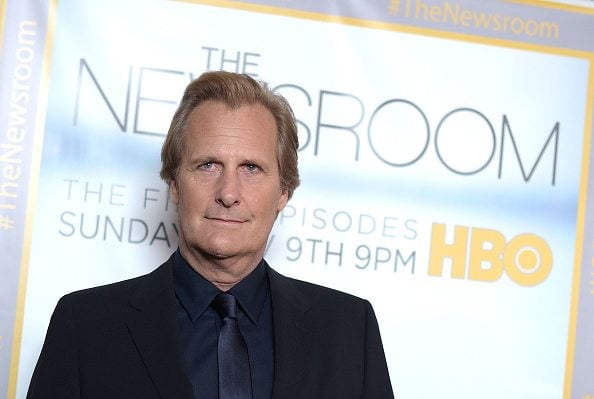 In 2012, Jeff began starring on "The Newsroom," which earned him a Primetime Emmy as well as nominations from the Golden Globes and Screen Actors Guild Awards. He appeared in the films "Steve Jobs" (2015), "The Martian" (2015), and "The Divergent Series: Allegiant" (2016), then played Frank Griffin in the 2017 Netflix miniseries "Godless." In 2018, Daniels appeared in "The Catcher Was a Spy" and portrayed John O'Neill in the Hulu miniseries "The Looming Tower." In 2020, Jeff played FBI director James Comey in the Showtime miniseries "The Comey Rule," co-starred with Aaron Paul in the film "Adam," and narrated the miniseries "Washington" on the History Channel. In 2019, it was announced that Jeff had been cast as the lead on the Showtime series "Rust" and would also serve as an executive producer.

He established the Purple Rose Theatre Company in 1991, and it is described as "the home of world-class, original American theatre in Chelsea, MI." Jeff has served as the Michigan Economic Development Corporation's spokesman, and in 2006, he was inducted into the Michigan Walk of Fame. He gave a commencement speech at the University of Michigan in December 2009 and was awarded an Honorary Doctorate in Fine Arts. Daniels endorsed Joe Biden in the 2020 presidential election and narrated a pro-Biden campaign ad titled "America Needs Michigan" in which he stated "Michigan deserves a president who believes in things like decency, honesty and respect."

Daniels has been nominated for five Primetime Emmys, winning Outstanding Lead Actor in a Drama Series for "The Newsroom" in 2013 and Outstanding Supporting Actor in a Limited Series or Movie for "Godless" in 2018. He has earned Golden Globe nominations for "The Purple Rose of Cairo," "Something Wild," "The Squid and the Whale," "The Newsroom," and "The Comey Rule," and he has received five Screen Actors Guild Award nominations. Jeff won a Saturn Award from the Academy of Science Fiction, Fantasy & Horror Films for "Arachnophobia," a Fantasporto International Fantasy Film Award for "Timescape," an Online Film & Television Association Award for "Godless," and an Audience Award at the 2002 US Comedy Arts Festival for "Super Sucker." 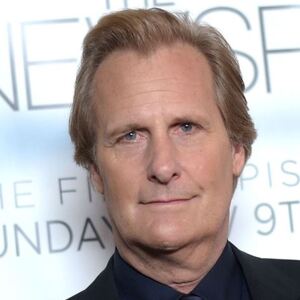