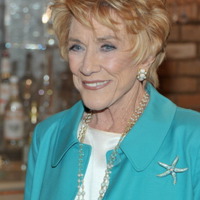 Jeanne Cooper net worth: Jeanne Cooper is an American actress who has a net worth of $8 million dollars. Born in Taft, California, Jeanne Cooper began her professional on-camera career in the early 50s, playing leading or supporting roles in a steady string of films, including "The Redhead from Wyoming", "The Man from the Alamo", "Five Steps to Danger", "Red Nightmare", "The Intruder", "Tony Rome", "The Boston Strangler", and "Kansas City Bomber". In 1973, she was cast in the role that would bring her the most widespread fame, as Katherine Chancellor on "The Young and the Restless". She has appeared on the soap opera since then, which makes her the longest continuous cast member. She also played the role of Marge Cotrook over the course of four seasons of the show. In addition to her work on "Y&R", she has also guest-starred on such television shows as, "Daniel Boone", "Perry Mason", "The Untouchables", "Guiding Light", and "The Nanny".