Jean Harlow net worth: Jean Harlow was an American actress and sex symbol who had a net worth of $100 thousand dollars at the time of her death, which is the same as around $1.7 million in today's dollars after adjusting for inflation. Jean Harlow was born in Kansas City, Missouri in March 1911 and passed away in June 1937. She was signed by director Howard Hughes and her first major film appearance came in the movie Hell's Angels in 1930. Harlow signed with Metro-Goldwyn-Mayer in 1983 and became a leading lady in films including Red Dust in 1932, Dinner at Eight in 1933, Reckless in 1935, and Suzy in 1936. By the 1930s she was one of the world's biggest movie stars and was nicknamed the Blonde Bombshell and the Platinum Blonde. Harlow was married three times including to Paul Bern and Harold Rosson. She received a star on the Hollywood Walk of Fame at 6910 Hollywood Blvd. Jean Harlow passed away on June 7, 1937 at 26 years old from cerebral edema and uremia. She passed away during the filming of the movie Saratoga which was completed using body doubles.

Jean Harlow net worth at death: After years of financial mismanagement at the hands of her step-father, Jean's estate at the time of her death was just $24,000, which is the same as around $400,000. Unfortunately she also owed $76,000 to the IRS, roughly $1.3 million in today's dollars. Her biggest asset was a $104,000 life insurance policy annuity that was left to her mother. 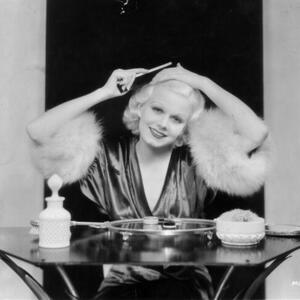