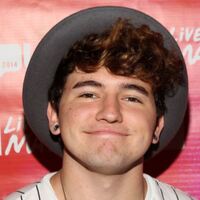 JC Caylen net worth: JC Caylen is an American YouTube personality and actor who has a net worth of $4 million. JC Caylen was born in Houston, Texas in September 1992. He started his YouTube channel in 2010 and has about seven million subscribers and 710 million views. JC Caylen has appeared in episodes of the TV series Teen Wolf, Fight of the Living Dead: Experiment 88, Escape the Night, and more. He has also appeared in the films Sickhouse, Party Boat, Boo! A Madea Halloween, and Boo 2! A Madea Halloween. He has a personal YouTube channel as well as the channel KianandJc with his friend Kian Lawley. He has been a member of the YouTube supergroup Out2ndLife along with Kian, Connor Franta, Trevor Moran, Ricky Dillon, and Sam Pottorff. JC Caylen released the compilation album Neptones in 2015 and it reached #1 on the Top Dance/Rap Billboard albums chart.