What Was Jayne Mansfield's Net Worth?

Jayne Mansfield was an American actress and singer who had a net worth equal to $2 million at the time of her death in 1967 after adjusting for inflation. Mansfield acted on stage and in film and television projects, and she was also a singer, nightclub entertainer, and an early "Playboy" Playmate. During the '50s and '60s, she was considered a major Hollywood sex symbol, and she was the first major American actress who was nude in a starring role in a Hollywood film (1963's "Promises! Promises!").

Jayne Mansfield was born Vera Jayne Palmer on April 19, 1933, in Bryn Mawr, Pennsylvania. She was the daughter of Herbert (an attorney) and Vera Palmer, and she spent her early years living in Phillipsburg, New Jersey. Herbert passed away from a heart attack in 1936, and three years later, Vera married Harry Lawrence Peers and moved the family to Dallas, Texas. Mansfield took ballroom dance lessons at the age of 12, and she attended Highland Park High School, graduating in 1950. As a teenager, Jayne took piano, violin, and viola lessons and studied German and Spanish. After high school, she studied acting at Southern Methodist University and the University of Texas at Austin. Mansfield later returned to Dallas and studied with actor Baruch Lumet, who helped her get her first screen test in 1954. 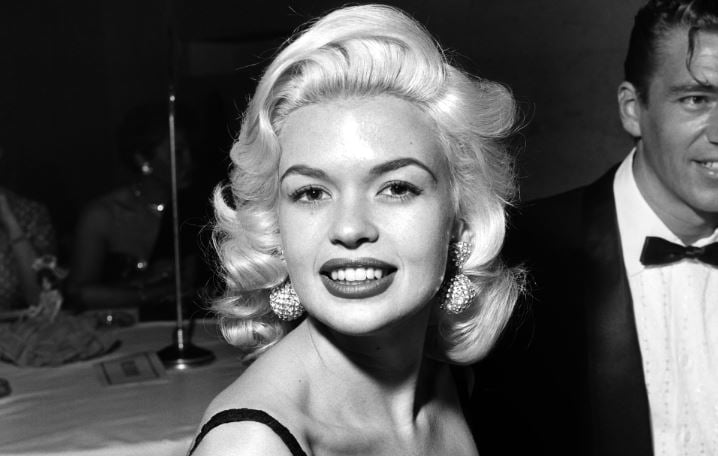 Jayne made her television debut on "Lux Video Theatre" in 1964, and her first film was 1955's "Female Jungle." That year she also signed a seven-year contract with Warner Brothers, had small roles in 1955's "Pete Kelly's Blues" and "Hell on Frisco Bay," and played Rita Marlowe in a Broadway production of George Axelrod's "Will Success Spoil Rock Hunter?" alongside Walter Matthau and Orson Bean. She reprised her role in the 1957 film adaptation, which was preserved in the Library of Congress' National Film Registry in 2000 for being "culturally, historically, or aesthetically significant." Jayne won a Golden Globe for her performance as Jerri Jordan in 1956's "The Girl Can't Help It," then she starred in 1957's "The Burglar," "The Wayward Bus," and "Kiss Them for Me" and 1958's "The Sheriff of Fractured Jaw." In the early '60s, she appeared in films such as "The Challenge" (1960), "Too Hot to Handle" (1960), "The Loves of Hercules" (1960), "The George Raft Story" (1961), and "It Happened in Athens" (1962), and in 1963, she played Sandy Brooks in "Promises! Promises!," which was banned in several cities due to the nudity it featured.

In 1964, Jayne appeared in the Italian films "L'Amore Primitivo" and "Panic Button" and the German film "Einer frisst den anderen," followed by 1966's "The Fat Spy" and "The Las Vegas Hillbillys." She had a cameo in 1967's "A Guide for the Married Man," and her performance as Johnnie/ Mae/ Eileen in "Single Room Furnished" is considered to be one of her best. The film was briefly released in 1966, then it was pulled from theaters and officially released in 1968, nearly a year after Mansfield's death. In 1968, the documentary "The Wild, Wild World of Jayne Mansfield" was also released. Though Jayne was mostly known for her film work, she appeared on several television series as well, including "Kraft Mystery Theater" (1961), "The Alfred Hitchcock Hour" (1962), and "Burke's Law" (1964)," and she performed on variety shows such as "The Jack Benny Program," "The Jackie Gleason Show," "The Steve Allen Show," and "The Ed Sullivan Show." By the late '50s, she was earning $20,000 for each TV performance. Mansfield's final television appearance took place on "The Joey Bishop Show" 10 days before her death; on the show, she read Robert Herrick's "To the Virgins, to Make Much of Time," a poem about seizing the day that includes the line "And this same flower that smiles today / Tomorrow will be dying."

Jayne married Paul Mansfield on May 6, 1950, at the age of 17. They welcomed daughter Jayne Marie on November 8, 1950. Jayne took classes at the University of Texas, and Paul, a member of the U.S. Army Reserve, was called up to serve during the Korean War. In 1954, the family moved to Los Angeles so Jayne could pursue an acting career. Jayne and Paul divorced in early 1958 (three years after they separated), and on January 13th of that year, Mansfield married bodybuilder, actor, and former Mr. Universe Mickey Hargitay, who had proposed to her in November 1957 with a 10-carat diamond ring. The couple began touring in stage shows, and Mickey co-starred with Jayne in films such as "Will Success Spoil Rock Hunter?" and "The Loves of Hercules." They also co-wrote the book "Jayne Mansfield's Wild, Wild World" and launched the businesses Jayne Mansfield Productions, Hargitay Exercise Equipment Company, and Eastland Savings and Loan. Mansfield and Hargitay had three children together, sons Mickey Jr. (born December 21, 1958) and Zoltan (born August 1, 1960) and daughter Mariska (born January 24, 1964). Mariska grew up to be an Emmy-winning actress known for playing Olivia Benson on NBC's "Law & Order: Special Victims Unit." Jayne and Mickey divorced in Mexico in May 1963, but it was not ruled valid by the state of California until August 1964.

Mansfield married director Matt Cimber on September 24, 1964, and they had a son, Tony (born October 18, 1965), before filing for divorce in July 1966. Around that time, Jayne began living with her divorce lawyer, Sam Brody, who was married to Beverly Brody at the time. Beverly filed for divorce, naming Jayne as the "41st other woman" in Brody's life. In November 1966, Mansfield's son Zoltan was attacked by a lion while visiting Jungleland USA with Jayne and Sam and had to undergo brain surgery. Brody sued the theme park, and it later closed due to the negative publicity. Two weeks before Mansfield's death, her eldest child, Jayne Marie, alleged that Brody had beaten her and reported him to the Los Angeles Police Department. She implicated Jayne in encouraging Sam's abuse, and temporary custody of Jayne Marie was awarded to her paternal uncle, William W. Pigue, and his wife. 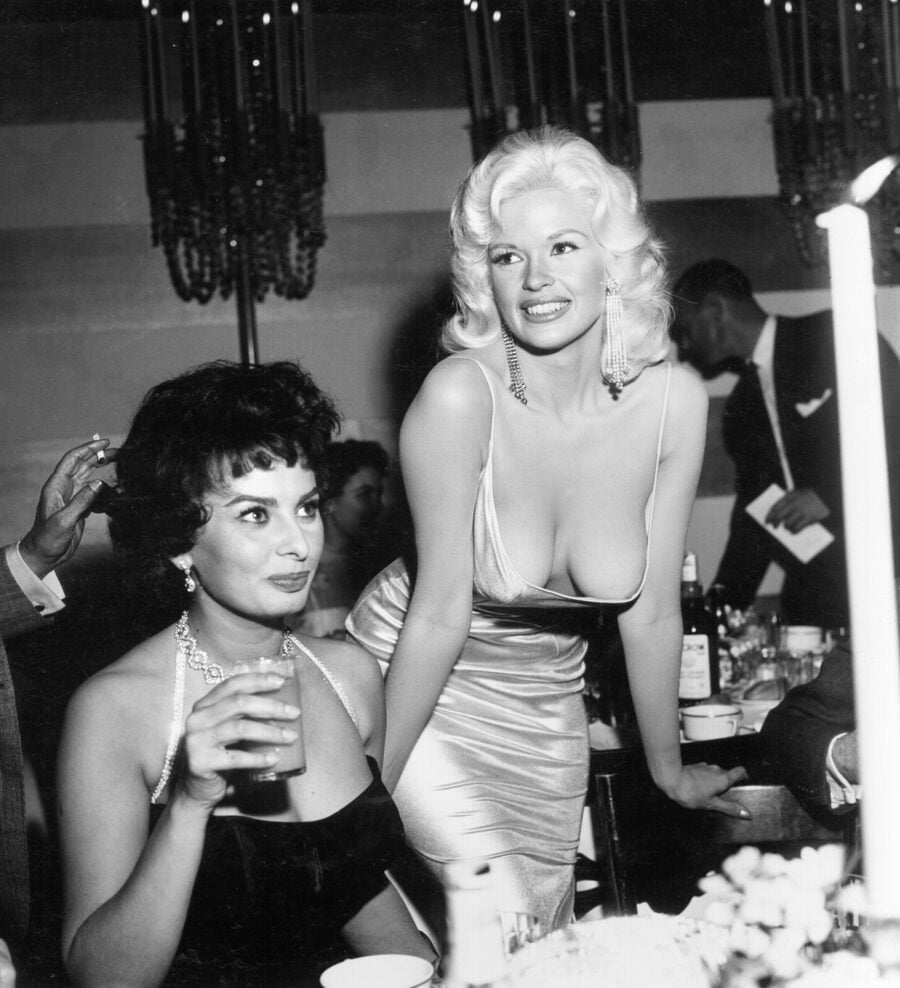 On June 29, 1967, Jayne, Mariska, Zoltan, Mickey Jr., and Sam Brody were riding in a car driven by twenty-year-old Ronnie Harrison when they were involved in an accident with a tractor-trailer on the way from Biloxi, Mississippi, to New Orleans. All three adults died instantly, and though it was erroneously reported that Jayne was decapitated, her official cause of death was "crushed skull with avulsion of cranium and brain." The children were asleep in the back seat when the accident occurred and only suffered minor injuries. Jayne's funeral took place in Pen Argyl, Pennsylvania, on July 3rd, and she was buried next to her father in Fairview Cemetery. The car that Jayne died in was housed at the Tragedy in U.S. History Museum in St. Augustine, Florida, before it was purchased by Scott Michaels, the owner of the Dearly Departed Tours & Artifact Museum in Los Angeles.

After the tragic accident, rumors swirled that Anton LaVey, the head of the Church of Satan (who met Mansfield in San Francisco in 1966), had cursed Sam Brody to die in a car accident. Jayne and Sam reportedly survived at least six car accidents before the one that took their lives. These rumors are explored in the 2017 documentary "Mansfield 66/67." After Mansfield's death, several people tried to gain control of her estate, including Cimber, Hargitay, and her mother. The estate was initially estimated to be worth $600,000 and included Jayne's home mansion, a sports car, jewelry, and Brody's estate (which he left to her in his will). Beverly Brody sued the estate in 1971 for more than $300,000 worth of jewelry and gifts Sam had given to Jayne, and in 1977, Mansfield's children discovered that their mother's massive debt (approximately $500,000) had left her estate insolvent.

In 1957, Mansfield won a Golden Globe for Most Promising Newcomer – Female for "The Girl Can't Help It," and in 1959, she earned a Laurel Award nomination for Top Female Musical Performance for "The Sheriff of Fractured Jaw." She won a Theatre World Award for Promising Personality for "Will Success Spoil Rock Hunter?" in 1956, and she received a star on the Hollywood Walk of Fame in 1960. In 2008, the Texas Film Awards posthumously honored Jayne with a Legacy Award (which was accepted by her daughter Mariska) and inducted her into the Texas Film Hall of Fame.

In 1957, Mansfield purchased a mansion on Sunset Boulevard in Los Angeles for $76,000. The mansion included 40 rooms, and Jayne and Mickey hired set decorator Glenn Holse to make some changes to the home. Since Mansfield loved pink, "the house was painted pink with cupids surrounded by pink fluorescent lights, pink furs in the bathrooms, a pink heart-shaped bathtub, and a fountain spurting pink champagne." Mickey, who had formerly worked as a carpenter and plumber, built a 40-foot heart-shaped pool in the backyard. Mansfield wrote to companies and asked for free samples to help her decorate the home, which resulted in Jayne receiving more than $150,000 in free merchandise. Since Jayne's death, celebrities such as Ringo Starr and Engelbert Humperdinck have owned the "Pink Palace," and after it was sold to developers in 2002, the mansion was demolished. 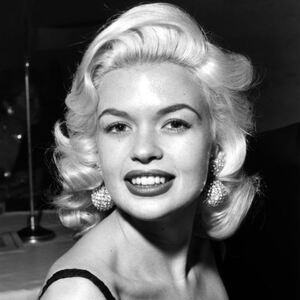