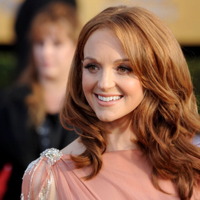 Jayma Mays Net Worth: Jayma Mays is an American actress and musician who has a net worth of $3 million. Born in Bristol, Tennessee, in 1979, Jayma Mays studied at Southwest Virginia Community College, Virginia Tech University, and Radford University. She made her on-screen debut in a 2004 episode of "Joey". Her film debut came a year later with the role of Cynthia in "Red Eye" alongside Rachel McAdams and Cillian Murphy. She appeared in "Epic Movie", "Paul Blart: Mall Cop", "Get Smart's Bruce and Lloyd: Out of Control", "Six Feet Under", "How I Met Your Mother", "House", "Entourage", "Ugly Betty", "Ghost Whisperer", "Pushing Daisies", and "Drunk History" before landing the part of Emma Pillsbury on the hit series "Glee" in 2009. Mays was part of the main cast for the show's first three seasons before her character became recurring starting in season four. She won a Screen Actors Guild Award for Outstanding Performance by an Ensemble in a Comedy Series along with her cast-mates on "Glee". She went on to appear in five episodes of "The League" before starring as Debbie on "The Millers". Mays voiced Grace Winslow in 2011's "The Smurfs" and 2013's "The Smurfs 2", and is set to appear in 2015's "Paul Blart: Mall Cop 2".