Jay Laga'aia net worth: Jay Laga'aia is a New Zealand Australian actor and singer who has a net worth of $6 million. Jay Laga'aia was born in Auckland, New Zealand in September 1963. As an actor he first starred on the television series Heroes from 1984 to 1986. From 1996 to 2001 Jay Laga'aia starred as Senior Constable Tommy Tavita on the TV series Water Rats.

From 2000 to 2003 he starred as David Silesi on the series Street Legal. Jay Laga'aia starred as Nick Pickering on the television series Bed of Roses from 2008 to 2011 and as Elijah Johnson on the TV series Home and Away from 2010 to 2012. He began starring as Jay on the series Jay's Jungle in 2015. He starred as Captain Typho in the movies Star Wars: Episode II – Attack of the Clones in 2002 and Star Wars: Episode III – Revenge of the Sith in 2005. 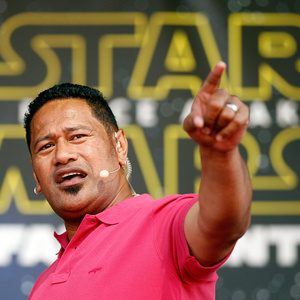