Jason Schwartzman Net Worth: Jason Schwartzman is an American musician and actor who has a net worth of $25 million. Schwartzman accumulated his wealth from a successful music career as the drummer for the band Phantom Planet followed by roles in many Hollywood movies and TV shows, mainly comedies. A member of the prominent Coppola Hollywood family, Jason's acting career was launched when he starred in the Wes Anderson/Bill Murray movie "Rushmore" (1998). He has since gone on to appear in more than 40 movies, including "I Heart Huckabees" (2004), "Shopgirl" (2005), and "Scott Pilgrim vs. the World" (2010), as well as the HBO series "Bored to Death" (2009–2011). In 2020, Schwartzman began appearing on season four of FX's "Fargo" and had a recurring role on Netflix's "Medical Police."

Early Life: Jason Schwartzman was born Jason Francesco Schwartzman on June 26, 1980, in Los Angeles, California. His mother is "Godfather" and "Rocky" actress Talia Shire, and his father was the late producer Jack Schwartzman. He has a younger brother, Robert, who is an actor and the lead vocalist of the band Rooney. Schwartzman's uncle (Talia's brother) is director Francis Ford Coppola. Nicolas Cage and Sofia Coppola are his first cousins. He also has two paternal half-siblings, Stephanie and John. Jason graduated from the Windward School in 1998.

Acting Career: Schwartzman made his film debut at 17, starring as Max Fischer in "Rushmore," and he soon followed it with guest-starring roles on "Sabrina, the Teenage Witch" (1998), "Freaks and Geeks" (2000), and "Get Real" (2000). In 2001, he appeared in his cousin Roman Coppola's "CQ," and the following year, he starred in "Slackers," "Spun," and "Simone." Jason then appeared in David O. Russell's "I Heart Huckabees" and co-starred with Steve Martin and Claire Danes in "Shopgirl," which was based on Martin's 2000 novella. In 2005, he had an uncredited role in "The Hitchhiker's Guide to the Galaxy" and was part of the all-star cast of "Bewitched," which included Will Ferrell, Nicole Kidman, Stephen Colbert, Steve Carell, Michael Caine, and Shirley MacLaine. Around this time, Schwartzman also landed the lead role on the Fox sitcom "Cracking Up" and played King Louis XVI in the 2006 film "Marie Antoinette," which was directed by Sofia Coppola. In 2007, he reunited with Wes Anderson for "The Darjeeling Limited" (which he also co-wrote) and played Ringo Starr to Jack Black's Paul McCartney, Paul Rudd's John Lennon, and Justin Long's George Harrison in "Walk Hard: The Dewey Cox Story."

In 2009, Jason appeared in Judd Apatow's "Funny People" (which he also performed the score for) and worked with Wes Anderson again, voicing Ash Fox in "Fantastic Mr. Fox." He starred as writer/private detective Jonathan Ames on "Bored to Death," which also starred Zach Galifianakis and Ted Danson, from 2009 to 2011, and he performed the show's theme song. Schwartzman then played villain Gideon Graves in 2010's "Scott Pilgrim vs. The World" and composer/lyricist Richard M. Sherman in 2013's "Saving Mr. Banks." He teamed up with Wes Anderson again for "Moonrise Kingdom" (2012), "The Grand Budapest Hotel" (2014), "Isle of Dogs" (2018), and "The French Dispatch," which is set to be released in 2021. In recent years, Jason has appeared in several Netflix projects, co-starring with Amy Poehler, Maya Rudolph, Rachel Dratch, Ana Gasteyer, and Tina Fey in "Wine Country" (2019), playing himself in "Between Two Ferns: The Movie" (2019), and starring in "Wet Hot American Summer: First Day of Camp" (2015) and "Wet Hot American Summer: Ten Years Later" (2017).

Music Career:  Schwartzman began playing drums at age 10, and he formed the band Phantom Planet when he was 14. He played drums and wrote songs for the band, and their first show took place at The Troubadour in Hollywood. Jason left the band in 2003, the same year their 2002 song "California" became the theme song for the Fox series "The O.C." The band released two albums while Schwartzman was a member: 1998's "Phantom Planet Is Missing" and 2002's "The Guest." He later embarked on a solo project called Coconut Records, releasing the albums 'Nighttiming" (2007) and "Davy" (2009). Jason played drums on Ben Lee's album "Awake Is the New Sleep" (2005), and his songs have been featured in numerous films and TV shows, such as "Smallville," "Slackers," and "Cloverfield." In 2015, Schwartzman played drums on Phoenix's cover of The Beach Boys' "Alone on Christmas Day," which appeared in Netflix's "A Very Murray Christmas."

Personal Life: Jason married designer Brady Cunningham on July 11, 2009, after three years of dating. They welcomed daughter Marlowe on December 4, 2010, and another daughter (whose name hasn't been revealed to the public) in June 2014. Schwartzman, who has said he is "basically a vegan," narrated the video "What to Eat: The Environmental Impacts of Our Food" for the charitable organization Farm Sanctuary in 2011. In 2009, "GQ" magazine included Jason on their "Top 10 Most Stylish Men in America" list. 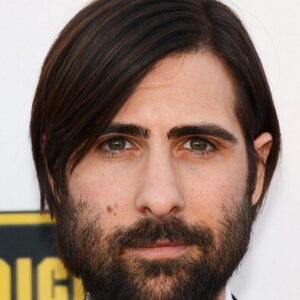