How much is Jason Priestley Worth?

Jason Priestley Net Worth and Salary: Jason Priestley is a Canadian-American actor who has a net worth of $12 million dollars.Jason Priestley is best known for his performance as the upstanding Brandon Walsh on the Fox teen drama television series "Beverly Hills, 90210." Later, he starred as Richard Fitzpatrick on the Canadian series "Call Me Fitz," and played Matt Shade on "Private Eyes." Among Priestley's other credits are the television shows "Sister Kate," "Tru Calling," and "Love Monkey," and the movies "Tombstone," "Hacks," and "Going the Distance."

Priestley began his television career doing commercials, and appeared early on in episodes of such shows as "Airwolf," "21 Jump Street," "Danger Bay," and "MacGyver." In 1989, he landed a lead role on the short-lived teen fantasy series "Teen Angel," and was in an episode of NBC's science-fiction series "Quantum Leap." Also that year, Priestley began another main role on the NBC sitcom "Sister Kate," which lasted for 19 episodes.

"Beverly Hills, 90210" and Television in the 90s: It was in 1990 that Priestley landed his most famous and influential role, playing Brandon Walsh on the hit teen series "Beverly Hills, 90210." The program won Priestley global fame and popularity, turning him into a teen idol in the 90s. He also received two Golden Globe Award nominations for his performance, and directed 15 episodes of the show. Although he left the series as an actor in 1998, he continued to serve as an executive producer until the show's conclusion in 2000.

Also in the 90s, Priestley hosted "Saturday Night Live," and appeared in episodes of "Drexell's Class," "The Outer Limits," and the animated series "Eek! The Cat." Additionally, he narrated the television movie "Choices of the Heart: The Margaret Sanger Story."

Further Television Career: Priestley appeared in numerous television movies throughout the early 2000s. He was in the Showtime film "Common Ground," the police procedural "Homicide: The Movie," and ABC Family's "I Want to Marry Ryan Banks." In 2004, he joined the cast of the Fox supernatural drama series "Tru Calling," and the next year, was in the television movies "Colditz," "Murder at the Presidio," and "Snow Wonder." Another main role came in 2006 on the short-lived CBS series "Love Monkey." Subsequent credits included the police procedural series "Without a Trace," the miniseries "Above and Beyond" and "Everest '82," and the television films "Luna: Spirit of the Whales," "Don't Cry Now," and "Termination Point." In 2007, Priestly had another lead role on the Lifetime series "Side Order of Life," which ran for 13 episodes.

Priestley had a longer-running lead role on the Canadian comedy series "Call Me Fitz," which ran from 2010 to 2013. He starred as Richard Fitzpatrick, a morally corrupt used-car salesman whose way of life is challenged by another, more virtuous salesman. Among Priestley's many other credits on television are "Haven," "Psych," "How I Met Your Mother," "CSI: Crime Scene Investigation," "Hot in Cleveland," and "Welcome to Sweden." He had a lead role opposite Molly Ringwald on "Raising Expectations," and had another main part opposite Cindy Sampson on "Private Eyes," which he also executive produces. In 2019, Priestley reunited with the original "Beverly Hills, 90210" cast for the Fox series "BH90210," which only lasted for a season.

Film Career: In 1986, Priestley made his big screen debut in the fantasy drama "The Boy Who Could Fly." He followed this with roles in the science-fiction horror film "Watchers," starring Corey Haim; the dramedy "Calendar Girl," costarring Gabriel Olds and Jerry O'Connell; the Western "Tombstone," with Kurt Russell and Val Kilmer; and the black comedy thriller "Coldblooded." In 1997, he starred in "Love and Death on Long Island," and had a supporting part in the comedy "Hacks." Priestley finished the 90s with "The Thin Pink Line," "Choose Life," "Dill Scallion," "Standing on Fishes," and "Eye of the Beholder."

Among Priestley's credits in the 2000s are "Lion of Oz," "Double Down," "The Fourth Angel," "Cherish," "Cover Story," and "Fancy Dancing." Later, he was in the satirical comedy "Die, Mommie, Die!," the Canadian teen comedy "Going the Distance," the dramedy "Hot Tamale," the action-Western "The Last Rites of Ransom Pride," the psychological thriller "Enter the Dangerous Mind," and the live-action/animation hybrid "Zoom." In 2014, Priestley made his feature directorial debut with the independent film "Cas and Dylan," starring Richard Dreyfuss and Tatiana Maslany.

Personal Life: In 1999, Priestley wed Ashlee Peterson; they divorced in 2000. Next, in 2005, Priestley married makeup artist Naomi Lowde. They welcomed a daughter, Ava Veronica, two years later. In 2009, the couple had a son.

Among his hobbies, Priestley is an avid race car driver. He has done circuit racing since 1996, and has driven such vehicles as Ford Mustangs and a Lotus Esprit V-8. In 2002, he was seriously injured during a practice run at the Kentucky Speedway when he crashed his car into a wall going almost 180 miles per hour. In 2008, Priestley became a joint owner in a new IndyCar Series team. He was also among the owners of the FAZZT Race Team, which competed in the IndyCar Series in 2010.

In an unrelated driving incident in 1998, Priestley crashed his Porsche into a telephone pole in the Hollywood Hills. He was arrested for driving under the influence, and had his driver's license suspended for a year. 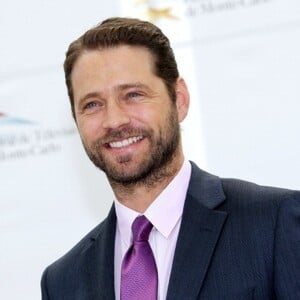