Jason Mantzoukas Net Worth and Salary: Jason Mantzoukas is an American writer, actor, producer, and comedian who has a net worth of $3 million. Mantzoukas is probably best known for playing Rafi on the FX series "The League" (2010–2015), and he has had recurring roles on several series created by Michael Schur, playing Dennis Feinstein on "Parks and Recreation" (2011–2015), Adrian Pimento on "Brooklyn Nine-Nine" (2016–2020), and Derek Hofstetler on "The Good Place" (2017–2020).

Mantzoukas has co-hosted the podcast "How Did This Get Made?" with Paul Scheer and June Diane Raphael since 2010.

Early Life: Jason Mantzoukas was born on December 18, 1972, in Nahant, Massachusetts. His parents, Cynthia and William, are second-generation Greek-Americans, and he has a younger sister named Melissa. Mantzoukas started taking drum lessons when he was 10 years old, and he studied with Steve Barrett for more than eight years. He was a member of the marching band and jazz band in high school, and he was in a cover band, Slygoul. Jason attended Swampscott High School, where he was captain of the soccer and track teams. After graduating in 1991, he majored in religion at Vermont's Middlebury College, earning his degree in 1995. After college, Mantzoukas received a Watson Fellowship and spent two years studying religious and transcendental music in the Middle East and North Africa. Mantzoukas was arrested several times during his travels, including an arrest in Morocco for an expired tourist visa.

Career: Jason started writing comedy sketches for variety shows in high school, and in college, he was a member of the improv comedy group Otter Nonsense Players, which also included Jessica St. Clair, Rodney Rothman, and Dan O'Brien. He moved to New York City in 1998 and began performing at the Upright Citizens Brigade Theater, where he learned from his future "Parks and Recreation"/"Baby Mama"/"The House" co-star Amy Poehler and joined the improv team Mother. He formed the comedy duo The Mantzoukas Brothers with comedian Ed Herbstman, and "Time Out New York" named them "Best Improv Duo" in 2006. Jason and Jessica St. Clair often wrote and performed together, appearing in the improv show "First Date" and the sketch show "We Used to Go Out." Mantzoukas later taught advanced improv classes at UCB, and he appeared on Comedy Central's "Upright Citizens Brigade" series in 2000. He made his film debut in 2004's "Terrorists," then he appeared in the movies "American Loser" (2007), "Baby Mama" (2008), "I Hate Valentine's Day" (2009), and "Splinterheads" (2009), guest-starred on "Human Giant" (2007), and did voice acting on "Squidbillies" (2008) and "The Life & Times of Tim" (2010–2012). 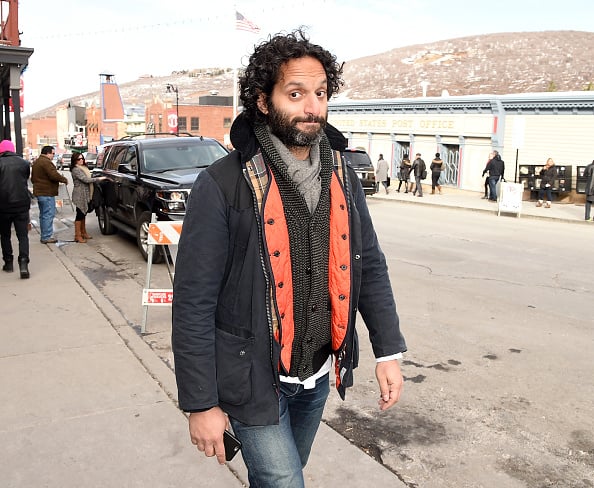 Personal Life: Jason dated actress Connie Britton in 2009; the two co-starred as husband and wife in the film "Conception," which was released in 2011. Mantzoukas has lived with an egg allergy since birth and will suffer from anaphylaxis if he ingests them. While filming "The League" in Las Vegas, he ended up in the hospital after eating granola from Starbucks that, unbeknownst to him, had egg whites in it. Jason said of the experience, "It really did alter how I do things. I started controlling more and more how and where I got my food — when I'm on a job specifically. I really try to limit whatever I'm eating so there are more checks and balances so I don't get burned. It's become enough of a headache that I need to be more vigilant and in control when I'm working."

Awards and Nominations:  In 2012, Jason won a Best in Improv award for "UCB Comedy Originals" at the Improvisation News New York Awards. The cast of "Regular Show: The Movie" earned two Behind the Voice Actors Awards in 2016, the People's Choice Voice Acting Award and the Special/DVD Voice Acting Award for Best Vocal Ensemble in a TV Special/Direct-to-DVD Title or Short. Mantzoukas was nominated for an Indiana Film Journalists Association Award for Best Actor for "The Long Dumb Road" in 2018, and he received Online Film & Television Association Award nominations for Best Guest Actor in a Comedy Series for "Brooklyn Nine-Nine" in 2017 and "The Good Place" in 2018.  Jason and his "The Good Place" castmates received a Gold Derby Award nomination for Ensemble of the Year in 2018.