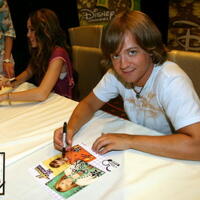 Jason Earles Net Worth: Jason Earles is an American actor who has a net worth $8 million. Jason Earles is a comedian and actor mostly known for his role as Jackson Stewart on the popular Disney show Hannah Montana. His other notable role is as Sensei Rudy in Kickin It. Jason was born in San Diego, California and later moved with his family to Oregon. He then attended Glencoe High School and Rock Mountain College in 2000. His film career started off with his geeky character portrayal of Brian Miller on the series Still Standing which ran from 2002-2006. He also appeared in movie National Treasure, playing Nicholas Cage's character's ancestor. He also made an appearance in American Pie: Band Camp as Ernie Kaplowitz. He also made two guest appearances of the Disney show, Phil of the Future. He also participated twice in the Disney Channel Games, with his first time being on the blue team and his second time being on the red team. He also hosted the Disney Channel's sing-along bowl-athon. He particularly hosted the New Year's Eve special.

His most notable role so far, is that of older brother to Miley Stewart (played by Miley Cyrus) in the Hannah Montana show. He kept his role for the whole of the show that lasted from 2006- 2011. He was also 29 years old at the time that he was meant to play a 16 year old character. He also played Hunter, in the Disney series Aaron Stone. Additionally, he lent his voice to character Spudnik in 2009 movie Space Buddies. He is currently working on the running series Kickin It.