Janina Gavankar Net Worth: Janina Gavankar is an American actress and musician who has a net worth of $500 thousand dollars. Janina Zione Gavankar was born in Joliet, Illinois in November 1980. She has acted in theatre, television, film, and online and also is a pianist, vocalist, and orchestral percussionist.

Janina was a theatre performance major at the University of Illinois at Chicago. Her first role came in the short Why Is God… in 2001. Gavankar appeared in the 2002 film Barbershop and in 2004's Barbershop 2: Back in Business. From 2007 to 2009 she had a recurring role as Papi in the TV series The L Word. In 2010 she starred as Leigh Turner in the series The Gates. She starred as Luna Garza in the series True Blood from 2011 to 2013. She had the recurring role of Shiva on The League from 2009 to 2013 and as Tessa on The Vampire Diaries in 2013. In 2014 she starred as Vanessa in the movie Think Like a Man Too. She is a former member of the female group Endera who was signed with Cash Money Records Universal Records. She claims that she was the first actor to use Twitter starting in 2006. She was also the personification of the search engine Ms. Dewey from Microsoft. 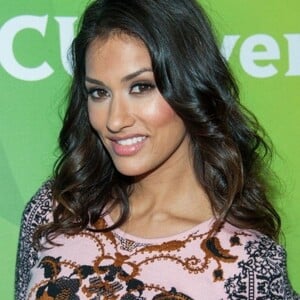