Jane Russell New Worth: Jane Russell was an American actress and sex symbol who had a net worth of $40 million. Jane Russell was born June 21, 1921 in Bemidji, Minnesota. A bona fide sex symbol in the film industry, Russell moved from the mid-west to California, where she landed her first film role in 1943 with The Outlaw.

After seeing photographs of the buxom bombshell, Howard Hughes signed his latest discovery to a seven-year contract full of the usual binding terms that marked Hughes' legal dealings with new actresses. True to his obsessive nature, Hughes was fixated on the gravity-defying aspects of Russell's figure, and mapped out all manner of displaying it to the fullest degree in her feature debut The Outlaw, which gave a hot-blooded account of the romance between Billy the Kid and a wanton named Rio (portrayed by Jane Russell). According to Hollywood legend, early rushes of the film left Hughes displeased about the level of exposure given to Russell's breasts in the film, and he designed a special bra that would exploit them to absurd levels. In her autobiography, Russell stated that she found Hughes' uber-bra too constraining to wear, and wore her own undergarment during filming. In 1947, Russell delved into music before returning to films. After starring in multiple films in the '50s, Russell again returned to music while completing several other films in the '60s. She starred in more than 20 films throughout her career. While Hughes was busy marketing Russell as prime cheesecake actress, Russell was quietly building a reputation as a capable actress and singer who could handle both drama and light comedy. Russell reached the apex of her movie career with the sparkling 1953 musical Gentlemen Prefer Blondes. Paired with Marilyn Monroe-another actress whose abundant sexuality overshadowed her acting abilities-Russell was hailed by critics for her dry comic delivery and singing talents.

Russell married three times, adopted three children and in 1955 founded the World Adoption International Fund. She was the recipient of several honors for her achievements in films, including having her hand and footprint immortalized in the forecourt of Grauman's Chinese Theatre, and being awarded a star on the Hollywood Walk of Fame in Hollywood California. In 1989, Russell received the Living Legacy Award from the Women's International Center for her tireless work for adoption groups. Jane Geraldine Russell died at her home in Santa Maria of a respiratory-related illness on February 28, 2011. 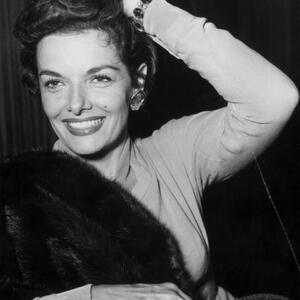