Jane Lynch net worth and salary: Jane Lynch is an American comedienne, actress and singer who has a net worth of $16 million. Jane Lynch is best known for starring as Sue Sylvester on the musical comedy television series "Glee," for which she received many awards. She has also had recurring roles on shows such as "Two and a Half Men," "The L Word," and "Criminal Minds." On the big screen, Lynch has appeared in a myriad of comedy films, including "The 40-Year-Old Virgin," "Role Models," and Christopher Guest mockumentaries such as "Best in Show" and "A Mighty Wind."

Jane Lynch Salary: What was Jane Lynch's salary per episode of Glee? $80,000.

Early Life and Career Beginnings: Jane Lynch was born in 1960 in Evergreen Park, Illinois, and brought up in Dolton. Her mother, Eileen, was a homemaker and secretary, while her father, Frank, was a banker. She is of Irish and Swedish ancestry, and was raised Catholic. As a teenager, Lynch went to Thornridge High School. Later, she graduated from Illinois State University, and obtained her Master of Fine Arts from Cornell University.

For 15 years, Lynch acted in Chicago's Steppenwolf Theatre Company; at the time of her audition, she was one of only two women selected for The Second City comedy troupe. Lynch continued to develop her improvisational and comic talents at Chicago's Annoyance Theater, where she played Carol Brady in a production of "The Real Live Brady Bunch."

Film Career: Lynch made her film debut in 1988, appearing in a bit part in the comedy "Vice Versa." In 1993, she had another small role in the Harrison Ford action film "The Fugitive," and also appeared as a reporter in Carl Reiner's sex comedy thriller "Fatal Instinct." In the 90s, Lynch was in several TV commercials, including one directed by Christopher Guest. A little while later, in 2000, Guest remembered Lynch and ended up casting her in his dog show mockumentary "Best in Show," in which she portrayed a butch lesbian personal dog handler. Subsequently, she became a staple actress in the casts of Guest's films, appearing in the director's "A Mighty Wind" as a porn actress-turned-folk singer, in "For Your Consideration" as an entertainment reporter, and in "Mascots" as a competitive sports mascot.

Additionally, Lynch garnered recognition for her roles in several high-profile comedy films, including Judd Apatow's "The 40-Year-Old Virgin," the Will Ferrell sports comedy "Talladega Nights: The Ballad of Ricky Bobby," and "Role Models," starring Paul Rudd and Seann William Scott. Among her other credits are the drama "Eye of the Dolphin"; the children's musical comedy "Alvin and the Chipmunks"; the thriller "The List"; Ari Gold's "Adventures of Power"; the Rainn Wilson comedy "The Rocker"; the biographical dramedy "Julie & Julia," starring Meryl Streep and Amy Adams; the movie adaptation of "The Three Stooges"; and the dramedy "The Late Bloomer." Lynch has also lent her voice to numerous children's animated films, including "Space Chimps," "Ice Age: Dawn of the Dinosaurs," "Shrek Forever After," "Rio," "Wreck-It Ralph," "Dino Time," and "UglyDolls." 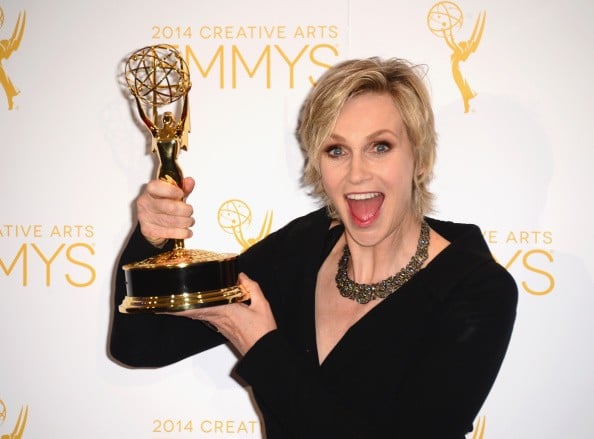 Television Career: Lynch has had a prolific career on the small screen. In the 90s, she appeared in episodes of such shows as "Empty Nest," "Married… with Children," "Party of Five," "Cybill," "3rd Rock from the Sun," "Frasier," and "Dharma & Greg." In the early 2000s, she was on "Judging Amy," "JAG," "Gilmore Girls," "The West Wing," "Dawson's Creek," "Cursed," "Boston Public," "Family Law," "The X-Files," "7th Heaven," "Felicity," "NYPD Blue," "Monk," "Arrested Development," "Friends," and "Veronica Mars." She also had recurring roles on the sitcom "Two and a Half Men," the Showtime series "The L Word," and the crime drama "Criminal Minds." Other television credits in the 2000s include "Lovespring International," on which she had a main role, and "Boston Legal."

In 2009, after starring in the Starz comedy "Party Down," Lynch had her biggest television role yet as bellicose cheerleading coach Sue Sylvester on the Fox musical comedy "Glee," which ran until 2015. For her performance, Lynch won Emmy and Golden Globe Awards. Another major television role came in 2013, when Lynch began hosting the NBC game show "Hollywood Game Night." Subsequent credits have included "Angel from Hell," "Dropping the Soap," "Manhunt: Unabomber," "The Marvelous Mrs. Maisel," "The Good Fight," "Final Space," and the 2020 revival of the game show "The Weakest Link," which she hosts.

Other Media: On the stage, Lynch wrote and starred in the acclaimed play "Oh Sister, My Sister," which inaugurated the Lesbians in Theater program at the Los Angeles Gay and Lesbian Center in 2004. In 2012, she participated in a performance of the Dustin Lance Black play "8," about the federal trial to overturn California's Prop 8. The next year, Lynch made her Broadway debut in the musical "Annie" as Miss Hannigan. Later, in 2015, she debuted her cabaret show "See Jane Sing," in which she performs with Kate Flannery and Tim Davis.

Personal Life and Advocacy: Lynch is openly lesbian, and was named one of Power Up's "10 Amazing Lesbian Women in Showbiz" in 2005. In 2010, she married clinical psychologist Lara Embry, whom she had met the year before in San Francisco. In 2014, the two divorced. Lynch has revealed that she is deaf in her right ear.

A lover of animals, Lynch has four rescue dogs. She has advocated for PETA to encourage the adoption of shelter animals, and sponsors an annual adoption event at Pasadena's Rose Bowl. Among her other advocacy engagements, Lynch served as a spokesperson for the Ban Bossy campaign, which worked to eliminate the problematic use of the word "bossy" when describing girls. 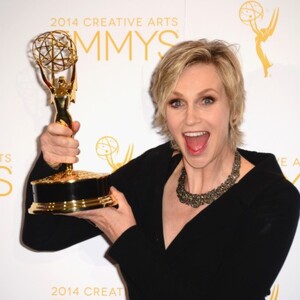