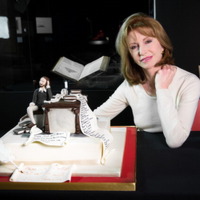 Jane Asher net worth: Jane Asher is an English actress and entrepreneur who has a net worth of $20 million. Jane Asher was born in Willesden, London, England in April 1946. Asher was engaged to Paul McCartney in the 1960s. Her first acting credit came in the 1952 film Mandy. In 2003 she starred as Angel Samson in the television series Crossroads. From 2009 to 2010 she starred as Sally in the TV series The Old Guys and from 2007 to 2010 as Lady Byrne in the TV series Holby City. Asher also starred in Alfie, Deep End, Brideshead Revisited, Crossroads, Death at a Funeral, and Waterloo Road. She was nominated for BAFTA Awards for Best Supporting Actress in 1972 and Best Actress in 1983. Asher wrote three best-selling novels and has published over a dozen books including on cake decorating. She has her own brand of kitchenware and is President of the National Autistic Society. She interviewed the Beatles in 1963 and had a five-year relationship with Paul McCartney before discovering him in bed with Francie Schwartz. Jane later married illustrator Gerald Scarfe and had three children together.