How much is Jane Adams Worth?

Jane Adams net worth: Jane Adams is an American actress who has a net worth of $1.5 million. Jane Adams was born in Washington, D.C. in April 1965. She graduated from the Juilliard School's Drama Division in 1989 and started performing with the Seattle Repertory Theatre. Adams made her screen debut in the 1985 movie Bombs Away. From 1996 to 1997 she starred in the television series Relativity as Karen Lukens. From 1999 to 2000 Adams starred as Dr. Mel Karnofsky in the TV series Frasier. She starred as Tanya Skagle in the series Hung from 2009 to 2011. Adams has starred in the movies Father of the Bride Part II, Music from Another Room, Happiness, You've Got Mail, Songcatcher, Wonder Boys, Orange County, Eternal Sunshine of the Spotless Mind, Lemony Snicket's A Series of Unfortunate Events, All the Light in the Sky, Digging for Fire, and Poltergeist. Adams won an Outer Critics Circle Award for Best Debut Performance acting on stage in I Hate Hamlet. She won a Drama Desk Award and Tony Award for her role in An Inspector Calls. In 2010 she was nominated for a Golden Globe Award for Hung. 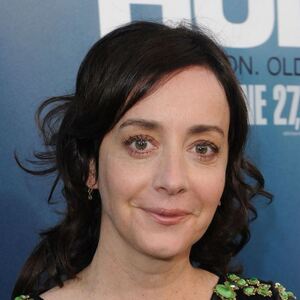