Early Life: James Marsden was born James Paul Marsden on September 18, 1973, in Stillwater, Oklahoma. His parents, Kathleen (a nutritionist) and James (a food safety advisor), divorced when James was 9. Marsden has four siblings, sisters Elizabeth and Jennifer and brothers Robert and Jeff, and he attended Oklahoma City's Hefner Middle School and Putnam City North High School. He graduated in 1991, then enrolled at Oklahoma State University, where he joined the Delta Tau Delta fraternity and studied broadcast journalism. After a year and a half, James left college to focus on an acting career.

Marsden guest-starred on "Modern Family" in 2011, and in 2013, he played Jack Lime in "Anchorman 2: The Legend Continues" and John F. Kennedy in "The Butler." Around this time, he also appeared on 13 episodes of "30 Rock" and voiced "Sir Brad Starlight" on the Disney Channel series "Wander Over Yonder" (2014; 2016). James appeared in the comedies "Walk of Shame" (2014) and "The D Train" (2015) and portrayed Burt Reynolds in the extended cut of Quentin Tarantino's "Once Upon a Time in Hollywood" (2019). He appeared on 17 episodes of "Westworld" between 2016 and 2018 and starred in the 2017 HBO mockumentary "Tour de Pharmacy." In 2020, James played Tom Wachowski in the live-action "Sonic the Hedgehog" film and Phil Crane in the FX miniseries "Mrs. America." He also took on the role of hero Stu Redman in "The Stand," which is based on the 1978 Stephen King novel and was previously made into a miniseries in 1994.

Awards and Nominations: James won a Blockbuster Entertainment Award for Favorite Supporting Actor – Science Fiction for "X-Men" in 2001 and an Online Film & Television Association Award for Best Guest Actor in a Comedy Series for "Modern Family" in 2011. He won the Spotlight Award at the 2011 Savannah Film Festival, and the cast of "Hairspray" earned ensemble awards at the Hollywood Film Awards, Broadcast Film Critics Association Awards, and Palm Springs International Film Festival. Marsden has received Gold Derby Award nominations for "30 Rock" and "Dead to Me," he was nominated for a TLA Gaybie award for Best Supporting Actor in a Gay Role for "The D Train." He earned Teen Choice Award nominations for Choice Movie Actor: Comedy for "Enchanted" and "27 Dresses" and Choice Movie: Male Scene Stealer for Death at a Funeral, and he received MTV Movie Award nominations for Best On-Screen Team for "X-Men" and Best Fight for "Anchorman 2: The Legend Continues." The casts of "Hairspray," "30 Rock," "The Butler," and "Westworld" were nominated for Screen Actors Guild Awards, and the "Kaguyahime no monogatari" cast earned a Behind the Voice Actors Award nomination for Best Vocal Ensemble in an Anime Feature Film/Special.

Real Estate: In 2014, James paid $1.8 million for a Hollywood Hills home that was designed by "Architect to the Stars" Edward H. Fickett. The home, which was built in 1959, features four bedrooms, three bathrooms, and glass walls, and the property includes a swimming pool, spa, and fire pit. Marsden also owned a 3,974 square foot home in Nashville, Tennessee, but he put it on the market for $1.25 million in 2010. 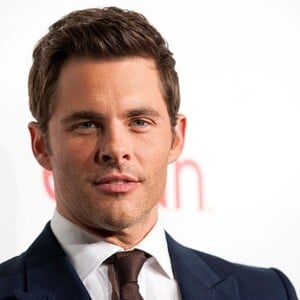