James Duthie net worth: James Duthie is a Canadian sportscaster who has a net worth of $3 million. James Duthie was born in Ottawa, Ontario, Canada in May 1966. He is the host of The NHL on TSN. Duthie has hosted series including CFL Live, SportsCentre, and NBA on TSN. He has won three Gemini Awards and two Canadian Screen Awards for Best Sportscaster in Canada.

Duthie formerly worked for VTV and CJOH and won an International Edward R. Murrow Award for news reporting. He helped produce the 2010 Olympic Games in Vancouver as well as the 2012 Games in London. Duthie co-authored the autobiography of Brian Kilrea They Call Me Killer and also wrote the books The Day I Almost Killed Two Gretzkys and The Guy on The Left: Sports Stories from the Beast Seat In The House. He represents the charity Christian Children's Fund of Canada. Duthie was featured in the 2016 film Goon: Last of the Enforcers. 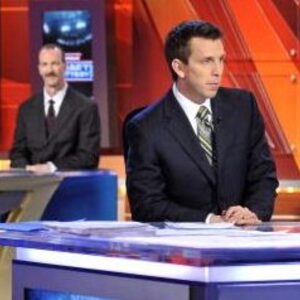