James Callis Net Worth: James Callis is an English actor who has a net worth of $750 thousand. Born in London, England, in 1971, James Callis studied at the University of York, earning his degree in English and Related Literature, before training at the London Academy of Music and Dramatic Art. Callis was heavily involved in theater, making several appearances in West End productions, and he later made his directorial debut with "Beginner's Luck". Callis made his on-screen debut in 1996's "Murder Most Horrid" and as Major Tim Forrester in nine episodes of "Soldier Soldier". His first film appearance came in the short "Weekend Bird" in 1997. His big break came as Tom in 2001's "Bridget Jones's Diary" alongside Renee Zellweger, Hugh Grant, and Colin Firth. He reprised the role in 2004's "Bridget Jones: The Edge of Reason". Callis landed one of his best-known parts, playing Dr. Gaius Baltar, in "Battlestar Galactica". He appeared in 73 episodes of the show from 2004 until 2010, including the 2007 TV movie "Battlestar Galactica: Razor". Callis won the Saturn Award for Best Supporting Actor for the part. He has since had roles in "One Night with the King", "Merlin and the Book of the Beasts", "Austenland", "Numb3rs", "FlashForward", "Merlin", "Midsomer Murders", "Eureka", "Key and Peele", "CSI: Crime Scene Investigation", and "The Musketeers". 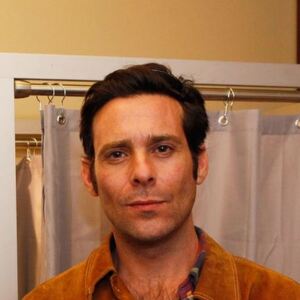