James Cagney net worth: James Cagney was an American actor and dancer who had a net worth equal to $20 million at the time of his death in 1986. James Cagney was born in New York City, New York in July 1899 and passed away in March 1986. He became known for playing tough guys in the films The Public Enemy in 1931, Taxi! in 1932, Angels with Dirty Faces in 1938, and White Heat in 1949. His career started out when he danced dressed as a woman in a chorus line and then worked as a dancer and comedian in vaudeville. Cagney went on to become named the 8th greatest male star of Classic Hollywood Cinema according to the American Film Institute. He signed a three-week contract with Warner Bros. which was extended to seven years. Cagney won an Academy Award for Best Actor in a Leading Role for Yankee Doodle Dandy in 1943. He was also nominated for the same awards for Angels with Dirty Faces in 1939 and Love Me or Leave Me in 1956. Cagney received a star on the Hollywood Walk of Fame at 6504 Hollywood Blvd. and received a Screen Actors Guild Life Achievement Award. James Cagney passed away on March 30, 1986 at 86 years old from a heart attack. 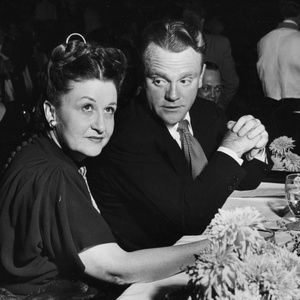