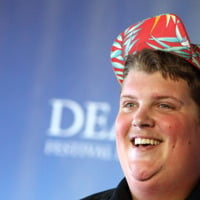 Jacob Wysocki net worth: Jacob Wysocki is an American actor and comedian who has a net worth of $400 thousand. Jacob Wysocki was born in Lomita, California in June 1990. He acted in school plays and performed with ComedySportz. In 2010 Wysocki starred as Dante Piznarski in the television series Huge. In 2014 he starred as Jacob in the TV mini-series Interns. In 2015 Wysocki starred in the TV series Resident Advisors. He has starred in the movies Terri, Fat Kid Rules the World, Boner Police: The Movie, Pitch Perfect, and Unfriended. Wysocki has also appeared in episodes of the TV series Glee and Super Fun Night. In 2011 Wyscoki was nominated for a Breakthrough Award at the Gotham Awards for Terri.