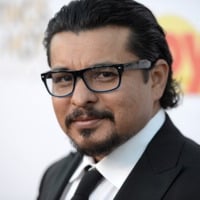 Jacob Vargas Net Worth: Jacob Vargas is a Mexican actor who has a net worth of $3 million. Jacob Vargas was born in Michoacan, Mexico in August 1971. He was raised in Los Angeles, California. Jacob has over 100 acting credits to his name. He got his start as a street dancer on the TV series Diff'rent Strokes in 1978. His official debut came in 1986 when he appeared in episodes of the TV series Hunter and Walt Disney's Wonderful World of Color. He also starred in the film Last Resort and the TV movies The Children of Times Square and Miracle of the Heart: A Boys Town Story. In 1996 Vargas had his first recurring role in the TV series Malibu Shores as Benny. From 2002 to 2003 he starred as Ernesto in the TV series Greetings from Tucson. He also had recurring roles in the TV series Moonlight from 2007 to 2008 and Blue and Sons of Anarchy since 2013. He has also starred in the films Last Resort, Ernest Goes to Camp, The Principal, Fatal Instinct, Get Shorty, Selena, Romy and Michelle's High School Reunion, Next Friday, Traffic, Jarhead, The Hills Have Eyes 2, Elysium, Cesar Chavez, and Heaven Is for Real. Jacob has won a Screen Actors Guild Award, NCLR Bravo Award, and Hollywood Film Festival Award.