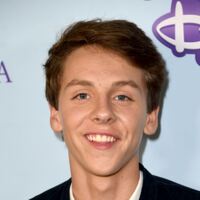 Jacob Bertrand net worth: Jacob Bertrand is an American actor who has a net worth of $2 million. He is best known for starring on TV series including Cobra Kai.

Jacob Bertrand was born in March 2000. He made his film debut appearing in the movie House in 2008. From 2012 to 2013 he starred as Henry on the television series Marvin Marvin. Bertrand starred as Gil on the TV series Bubble Guppies from 2011 to 2016. From 2014 to 2017 he starred as the title character on the television series Kirby Buckets. Jacob Bertrand began starring as Hawk on the TV series Cobra Kai in 2018. He has appeared in films including Duress and Ready Player One. Bertrand had a recurring role as Abel on the series Homeschooled in 2011. He has provided voicework for movies, TV series, and TV movies including Mitch Albom's For One More Day, November Christmas, Tooth Fairy 2, ParaNorman, Rise of the Guardians, Tom and Jerry's Giant Adventure, and more.