Jaclyn Smith Net Worth: Jaclyn Smith is an American actress and entrepreneur who has a net worth of $150 million. She became an international super star after starring on the 1970s show "Charlie's Angels", but has since gone one to create an incredibly lucrative licensing and merchandise empire. Smith essentially pioneered the concept of celebrities creating their own line of products. Prior to Jaclyn Smith's revolutionary approach to "cashing in" on fame, celebrities typically endorsed existing product lines instead of creating their own. In terms of her acting career, Jacyln Smith is probably best known for her role in the original Charlie's Angels television series.

Early Life: Jaclyn Smith's real name is Jacquelyn Ellen Smith, and she was born on October 26th of 1974 in Houston, Texas. After attending Trinity University in Texas, she dropped out after a year to enroll in the Balanchine School of American Ballet. Modeling and commercial roles soon followed after Jaclyn Smith discovered her appearance was in high demand.

Career: Of course, Smith's big break came with the release of Charlie's Angles in 1976. She landed the role of Kelly Garrett, and what started as a TV movie of the week turned into one of the most iconic TV series of all time. After three seasons, Jaclyn Smith was known all around the world, and the show received top ratings. Various products, such as packs of bubble gum and toys, began to sell around the world – often using Smith's likeness. Of all the "Angels," Smith was the only character not to be replaced until the series ended in 1981. Not only that, but Jacyln Smith later had a cameo in the 2003 film Charlie's Angels: Full Throttle.

During her time on Charlie's Angels, Smith also took roles in various movies, such as Escape from Bogen County and Nightkill. She also earned a Golden Globe nomination immediately after Charlie's Angels was canceled with her role in Jacqueline Bouvier Kennedy. A string of other movie roles followed throughout the next few years, with one of the most notable being 1985's Deja Vu.

In 2000, she landed a role in the series The District, appearing on the show for the next four years. After a five-year absence, she returned to the world of acting with roles in Law & Order: Special Victims Unit and CSI: Crime Scene Investigation.

Entrepreneurial Pursuits: Jaclyn Smith has been an active and successful entrepreneur over the years, capitalizing on her fame and adding considerably to her wealth. Her first foray into the world of entrepreneurship was in 1985 when she launched a clothing line through Kmart. Since then, she has launched various other product lines, mostly through Kmart. Her products include home furnishings, bedding, bath accessories, and even wigs.

She reportedly generates over $100 million per year in gross sales through partnerships with Kmart and other retail outlets.

Personal Life: In 1968, Jaclyn Smith married Roger Davis, a fellow actor. Seven years later, the marriage ended in divorce. Next, Smith married Dennis Cole, another actor who appeared alongside her on various episodes of Charlie's Angels. The couple was wed in 1978, but the relationship ultimately ended in divorce once again in 1981. That year, she then married Tony Richmond, a filmmaker. The couple had two children together before they divorced in 1989. In 1997, Jaclyn married Brad Allen, a surgeon. In 2003, Jaclyn Smith was diagnosed with breast cancer. She recovered after a substantial battle with the disease. 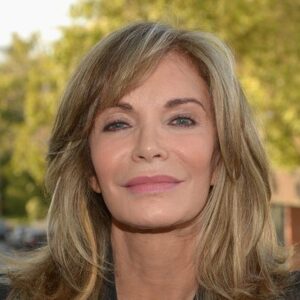