Jackie Sandler net worth: Jackie Sandler is an American actress and model who has a net worth of $50 million dollars. She is best known for the being wife of actor and comedian Adam Sandler, and perhaps not surprisingly, Adam is the source of Jackie's net worth.

Jackie was born in Coral Springs, Florida in 1974. She is of Italian descent and was born to an attorney and a state legislator. She started fashion modeling in high school. She got her start in motion pictures through Rob Schneider. She made her on screen debut in the movie Deuce Bigalow: Male Gigolo playing "Sally". Acting in this film led to her meeting Schneider's friend and colleague Adam Sandler. Adam gave her a role in one of his movies, Big Daddy. From then on Jackie Sandler has appeared in many of her husband's films including 50 First Dates, Eight Crazy Nights, Grown Ups, and Paul Blart: Mall Cop. She also is credited as a music assistant for Big Daddy. She often plays bit parts in the movies and is often credited as Jackie Titone, her maiden name. Jackie and Adam Sandler have two daughters, Sadie Madison born in 2006, and Sunny Madeline born in 2008. 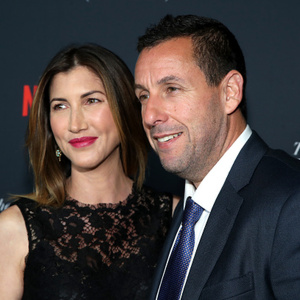